That didn't take long. As our enterprising cub reporter Biff Spackle predicted a few days ago, Keith Olbermann got a pink slip from MSNBC's new owner. The termination notice reads, in part, "Don't let the door hit you on the...":

Cable host Keith Olbermann and news channel MSNBC abruptly parted ways on Friday night, as the network announced it had agreed to end his contract and the last installment of his show would air that evening. 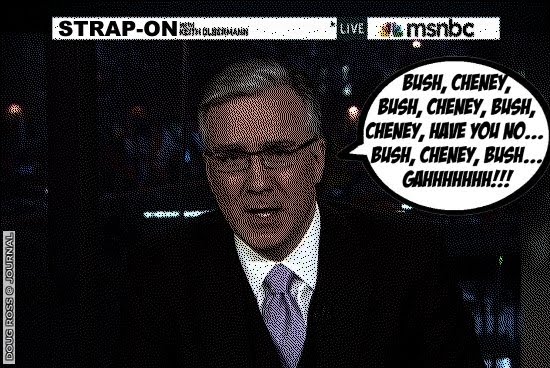 The surprise announcement strips MSNBC of its most-watched evening anchor after an increasingly tempestuous relationship, coming less than three months after the network briefly suspended the fiery host.

The network reports that the 8pm slot will be filled with reruns of Top Chef -- alternating with airport radar -- until further notice.


Linked by: Michelle Malkin and Memeorandum. Thanks!
at 11:37 PM
Email ThisBlogThis!Share to TwitterShare to FacebookShare to Pinterest
Labels: Democrats, extremism, MSM, Obama, Olbermann

MSNBC should keep Keith Olbermann and get rid of Rachel Maddow. It could be possible though that Olbermann was the one who quit MSNBC. The story will come out over the next few days. He was the only one worth watching. Just like in the morning, Joe Scarborough is tolerable but his sidekick Mika Brzezinski needs to be fired. She is so arrogant and just constantly interrupts everyone and never knows when to shut up. Most of what she says sounds like nonsense anyway.

OK, I hear Olbermann called "Strap on" sometimes. Does anyone know why?

I kinda like the slimy corporate way Comcast liquidated Keith...Just a few weeks after he got wrist-rubbed (not even a tap) for his political contribution$, they rub him out without even an explanation or preparation.

In a way, they were perfect for each other...

And did you hear Keith's "I'm so graaaaaateful for my loyal fans who made this all possible" speechlet? Yeah, loyal fans...both of them. The LSM stories were so funny, they kept repeating how Olb. had the most popular show "on MSNBC." Isn't that a little like having the best human rights record in the Soviet bloc?

BTW, doesn't Elliott Spitzer need a partner now? These two were MADE for each other.