Does the phrase 'out of his depth' ring a bell? 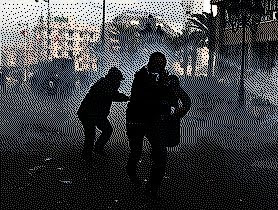 • Lebanon is under new management: the vicious, Iranian-backed group called Hezbollah, which is responsible for the terrorist attack that killed 241 U.S. Marines in Beirut. Their aim is written into their charter -- to destroy Israel and the United States

• Gaza's Hamas-led government is reportedly importing a new strain of Iranian extremists; Hezbollah agents are said to be making their way into the Palestinian enclave to train soldiers for an attack on Israel 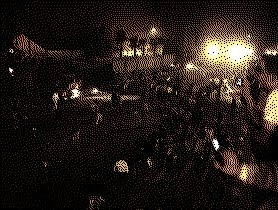 • Iran continues its work on nuclear armaments and intercontinental ballistic missile technologies, its steady progress delayed only by a clever cyber-attack

• Mexico, on our unprotected southern border, is a failed narco-terror state with roughly 30,000 of its citizens killed in the last five years alone -- and refugees streaming north on a daily basis

• China is on the move: building aircraft carriers, stealth fighters, locking up energy contracts all over the world, and generally preparing to occupy Taiwan and -- eventually -- regions closer to the U.S.

In the midst of these ominous, momentous events, the President took time to field questions during a Q&A session hosted on YouTube. Among the weighty concerns: what the federal government should do about healthier food for schoolkids. 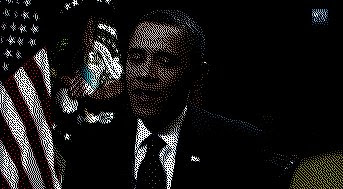 Hahahahahahaha... well, the, uh, the main thing I've done is, uh, ah, I... I... have the First Lady, who is, uh, just driving this, uh, this issue in, uh, incredible way across the country, uh, I don't know if you've read recently for example that, uhm, eh, she was able to negotiate something with Wal-Mart where, for the first time, they're going to start putting labels on their products and also emphasize more healthy choices for their customers...

...When Wal-Mart ends up saying, uh, we're gonna end up buying healthier stuff then suddenly all the producers start saying, we better start producing healthier stuff, eh, and that can make it cheaper... and one of the things we're trying to do is encourage linkages between, uh, local supermarkets, local farmers, local producers, to figure out how can we get fresh produce into communities...

As an aside, I wonder who's been controlling school lunch programs in Washington for, oh, the last forty decades or so? Would that be a giant, unaccountable, unelected bureaucracy that doesn't do anything well?

Just when you thought we would never see any President worse than the disgraceful Jimmy Carter -- who oversaw the creation of the Iranian Thugocracy -- we are forced to endure a man who befriends dictators, tacitly encourages despots, supports socialists and has the cojones to confront only one country: Israel. For building apartments in its capitol of Jerusalem.

And where is legacy media? Can they put together a few of these puzzle pieces for us?

Uhm, no. They're too stupid or too ideological -- and it really doesn't matter which at this point.

Consider the world an ocean boiling over in stormy weather -- and our ship of state is rudderless.

I can't find the original quot but it goes something like this.
"Fail domestically you lose elections, fail in defense you lose the country"

Obama has failed at both. If oil goes to $300 it won't be a question of recovery, it will be finding enough to eat.

Doug this is so unfair. You forgot, Obama did sign the START Treaty, so if all nations go to war, there is most certainly one nation with no intention of defending itself.

Don't forget Obama intervened in Honduras by backing Zelaya. Zelaya had computer confiscated that showed results in his favor for an election yet to be held.

Obama punished the poor country of Honduras by withdrawing aid.

Way to prioritize, Barry!
Where in the hell did anyone ever get the idea that he was smart or even remotely articulate? Geez!
He makes Carter look like Reagan!

Doug I think the flaw here is that you assume that Obama would agree that all the things you mentioned are bad.
There hasn't been one single example to prove that this guy wants to protect or project American might.

To the guy who mentioned Honduras: you do realize that Obama has accepted the regime there since they had fraudulent elections to elect another right wing government?

Also, whatever became of the "freedom agenda"? I guess when third worlders revolt against tyranny without the "supervision" of the US empire it's a bad thing, eh?