Our Legacy Media Thought Experiment for the Day

Prior to his State of the Union address, President Obama went to lunch with five of his most trusted public relations advisers. 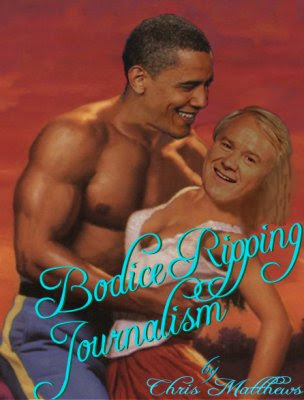 President Obama met with several top news personalities and pundits on Tuesday before his State of the Union Address.

Per a White House pool report, the president met with the group for lunch at the White House this afternoon.

Among the figures reported to be meeting with the president were:

...The president has been known to meet with journalists occasionally for informal chats. The discussions are typically off the record, meaning that the content of Tuesday's discussion will likely remain unknown.

Here's our thought experiment for the day:

Imagine that just before the State of the Union in 2006, when Iraq was reaching a boiling point, President Bush went to a private lunch with Rush Limbaugh, Sean Hannity, Mark Levin, Charles Krauthammer and Hugh Hewitt. The topics of their discussion were off the record, meaning that they were not disclosed to legacy media.

I want you to predict how many outraged New York Times op-eds would result. How many Special Comments and Worst Person in the World bile-duct secretions by Strap-On would be produced as a consequence. And how many deranged Vanity Fair conspiracy nuts would become employed in the aftermath.

My over-under for the total is 45.

Probably just a meeting of the Obama leftist propaganda czars. Not a chance in the world that any truth would escape with that bunch. Why do we put up with this Anti-American garbage?

If Hewitt had been there, we'd never have heard the end of it-he's the most pompous asshole on talk.