After the T-shirts, the speeches, the vitriol and the crass political gamesmanship, what remains is tragedy.

The death of Dorothy Morris, 76, left her husband, George, a widower after 54 years of marriage. The Tucson man was shot twice as he tried in vain to shield her -- his high school sweetheart -- from the barrage of bullets.

"George heard the pop-pop and tried to throw Dot to the ground and get on top of her, but it was too late," JoAnn Newland, the Morrises' neighbor, told The Arizona Republic. Friends said the Oro Valley couple acted like newlyweds and said George would lovingly refer to his wife as his girlfriend. "It was like they were still on their honeymoon after 50 years of marriage," Bonnie Royle, a neighbor who was friendly with the couple, told the paper.

Others described Dorothy Morris, a mother of two who was born and raised in Reno, Nev., as a kind and shy woman. "Dot was just a sweet, quiet, lovely person," Marilyn Melton, a friend, told the Reno-Gazette Journal. "I think what you'd call her is just nice, a nice lady, a nice human being." George remains hospitalized but is expected to recover from his wounds. 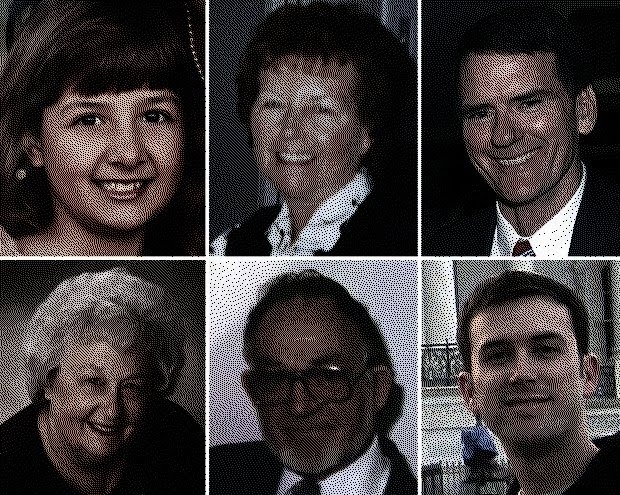 Phyllis Schneck, 79, left behind her three adult children, seven grandchildren and a great-granddaughter. Schneck's daughter B.J. Offutt struggled to comprehend how her mother, a homemaker and widow known for her cooking, could have come to such a violent end. "I can't make sense of it," Offutt told The Wall Street Journal. "There's no logical reason for it."

Offutt said she remembered her mother saying that she agreed with Giffords about "needing to better control the border." But another daughter, Phyllis Rautenberg, said their mother wasn't particularly political. "She was a woman that got married in the early 1950s, and she did all of that June Cleaver stuff," Rautenberg told The Washington Post. "She loved Tucson and had lots of friends there, and spent lots of time at her church."

Gabe Zimmerman was only 30. As Giffords' director of community outreach, he helped to plan the constituent meeting that ended in the deaths of six people. His father, Ross Zimmerman, said his son was caring, smart and hardworking. "I just want people to remember him," he told ABC News. The Giffords staffer had a fiancee, as well, a nurse by the name of Kelly O'Brien who is grieving today instead of planning her wedding. "For the moment, at least, Kelly has lost her future," Ross Zimmerman said of O'Brien.

C.J. Karamargin, another Giffords staffer, said Zimmerman, who grew up in California, was an incredibly hard worker. "Gabe was unfailingly patient with people. He presided over thousands of constituent cases," he told the Los Angeles Times. "He was helping World War II vets get medals, people with Medicare benefits, veterans with benefits issues. These are the types of things day-in and day-out he did, and he was determined to just do the best he could. He worked hard, he really worked hard."

Dorwin Stoddard, 76, died in the arms of his wife, Mavanell, or "Mavy" Stoddard, after trying to protect her from the gunfire. The pair were also high school sweethearts but grew up to marry other people before reuniting in the mid-1990s when they both became widowed. Dorwan was remembered as a caring husband and father and an active member of his church. Mavy was shot three times in the leg as she held her dying husband, but she survived.

Mike Nowak, the Stoddards' minister, said he could find no explanation for Stoddard's death. "You can't," he told The Arizona Daily Star. "We live in a world that is full of crime, full of hatred. You can ask yourself the question 'Why?' but there's never an answer when it hits so close to home."

There is a prayer that has been passed down through the millenia to memorialize our dearly deceased:

May the great Name of God be exalted and sanctified,
throughout the world, which he has created according to his will.

May his Kingship be established in your lifetime and in your days,
and in the lifetime of the entire household of Israel,
swiftly and in the near future;
and say, Amen.

May his great name be blessed, forever and ever.

Blessed, praised, glorified, exalted, extolled, honored elevated and lauded
be the Name of the holy one, Blessed is he-
above and beyond any blessings and hymns,
Praises and consolations which are uttered in the world;
and say Amen.

May there be abundant peace from Heaven, and life,
upon us and upon all Israel;
and say, Amen.

Very moving Doug, thank you for posting this.