Bumped & Updated!
America is about to hit its $14 trillion debt ceiling at which point the country's credit card is maxed out. Republicans need to do two things: they must brand their efforts to cut government spending and they must also force radical cuts upon an out-of-control federal government. We have no choice if we are to save this country -- and rest assured Democrats aren't going to play nice.

So we'll negotiate a compromise of sorts, which I believe is my awesomest idea ever. I call it Debt Ceiling Cap-and-Trade. We'll negotiate a deal wherein Republicans will agree to raise the ceiling as long as a set of future cuts are signed into law. 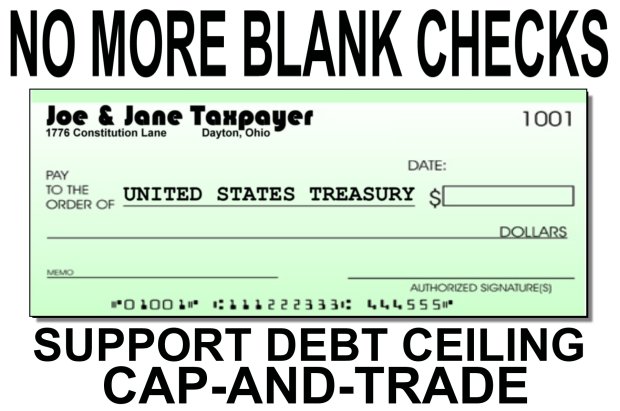 I call this part of the plan 'Debt Ceiling Cap-and-Trade'. We conservatives are nothing if not tolerant, so we'll let the Democrats pick their spending cuts. But they must choose from our list.

Since Nancy Pelosi's House of Representatives added more than $5 trillion in new deficits, we'll use that figure as our minimum (we'll call it the 'cap', just for fun). Each trillion will be represented by a "point".

Democrats are free to pick any combination of programs that total up to 5 points. They get to choose. If they want the debt ceiling raised, they have to get to 5.

I am the first time on this site and am really enthusiastic about and so many good articles. I think it’s just very good.
Always yours

You da man-I believe if this were to be put forth by House conservatives, we would see The NYT building spontaneously implode
MM

I have gotten so fed up with the 'we have to raise taxes/no, we have to lower taxes' crap that I have stopped listening.

Don't tell me that UNTIL you have made a serious effort to PRIORITIZE spending projects and REALLOTTED the bottom 20% to the top 20% Mr Congresscritter/Senate Boob. Then cut all foreign aide by 50%--once again by priority and allocation--and cut the federal work force across the board by 10%.

Then get back to me...in other words: DO YOUR DAMN JOB AND STOP WHINING. And don't ask me for more money until you show me you can handle what I already provide moron.

A couple more you can add:

You Sir are like a cerebral umbrella, providing us protection from the soaking the libmedia gives the public every hour. Lars