Democrat: 'I Told You to Be Civil, You Right Wing Nazis!'

You might have assumed that Democrats are setting a new tone in Washington after last week's tragedy in Tucson. But you'd have assumed wrong. After all, their long, storied history is one of extreme, violent rhetoric and -- as could have been predicted -- their recent calls for civility were short-lived indeed. 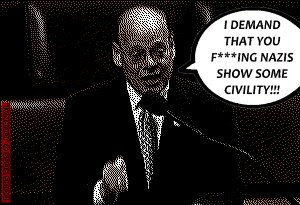 In an extraordinary outburst on the House floor, Rep. Steve Cohen (D-TN) invoked the Holocaust to attack Republicans on health care and compared rhetoric on the issue to the work of infamous Nazi propagandist Joseph Goebbels.

“They say it’s a government takeover of health care, a big lie just like Goebbels,” Cohen said. “You say it enough, you repeat the lie, you repeat the lie, and eventually, people believe it. Like blood libel. That’s the same kind of thing. And Congressman Cohen didn’t stop there.

• If you like your current health care plan, you can keep it.

• Health care reform won’t add 'a single dime' to the deficit—and will actually cut it!

• Ninety-five percent of Americans will not see any form of tax increase because of Obamacare.

• There will be no government rationing of medical care!

• Obamacare will not allow for funding of abortions with taxpayer money.

• Health care negotiations will occur in public and will even be seen on CSpan.

Now, was someone talking about a comparison to Goebbels?

That ass might conceivably be the worst liar and stupidest president we've ever experienced.

Your post would have had some credibility if you hadn't ruined it with the speech bubble.Kinda lowers it to the level of the opposition don't ya think?

Graham Hughes: Your comment might have had some validity if you hadn't used the nonword "ya". As it stands, you just sound like a whiny, ill-educated loser.

Funny how time and reality are proving every one of those things you cite as lies to actually be true.

I am happy with my insurance, I just renewed it and there is nothing in that law that is going to make me change it.

Interestingly, premiums are starting to come down, mine did, for the first time EVER.

I own a small business and am finally able to help my employees get healtcare, this helps them stay with my company. Believe it or not, that actually HELPS my business.

You can lie all you want about the cbo report but you can't invalidate it.

I have no research on this one.


The use of "The Big Lie" as documented by gobbles is definitely an OBVIOUS republican strategy.
It's too bad you diden't start destroying education a generation earlier, you might have fooled more people. As it stands now the majority can see that you are just liars.

Sure it is, anonymous loser.

Tell you what: try enlightening the 2/3 of all doctors who say that Obamacare will result in lower quality of care:

Now go prattle your lies somewhere else, schmuck -- perhaps back at SEIU headquarters.

Bite me. Oops. Was that uncivil?

Now get the hell off my blog, wanker.