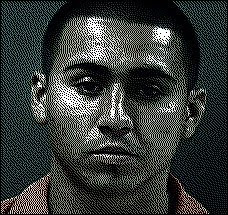 Salvador Portillo-Saravia, a member of the MS-13 street gang, was charged with raping an 8-year-old girl at her Fairfax County home last month. But he never should have been in Fairfax in the first place... Federal officials deported Portillo-Saravia, of Sterling, to El Salvador in 2003, and he sneaked back in illegally. Now, officials are wondering why a much-touted federal program didn't catch him before the rape...

...Four weeks before the crime, Portillo-Saravia was in the Loudoun County jail for public intoxication. That's when the Immigration and Customs Enforcement (ICE) program, called Secure Communities, should have identified him...

...ICE said Portillo-Saravia illegally entered the country in 2000. He was deported in October 2003 after what ICE called an encounter with the Prince William police gang unit. It is not known when he reentered the country, but reentry is a federal offense.

This nation's porous borders are a disgrace and a danger. The panderers in the Democrat Party could not care less about the safety of America's "middle class". They want Balkanization and they need the votes, illegal or not.

In California alone, the cost of educating, incarcerating and caring for illegals first surpassed $10 billion in 2004. Today the expenditure is well above that.

But those numbers don't reflect the human toll. Allowing anyone at all -- criminals and terrorists among them -- to walk into this country, without so much as a pat-down or a background check, is an affront to the notion of government.

Think about it. Protecting America's borders is the one damn thing that this federal government is supposed to do -- is constitutionally required to do -- yet it won't do it.

Just as with Iraq, Democrats are willing to play politics with the lives of Americans in the hopes of stealing more power.

In a surprise move on Friday, a 44-year-old Butler County man who held a woman captive in a closet for 10 days and repeatedly raped her pleaded guilty to all charges. William H. “Wild Bill” Manis, a white separatist from Hamilton, faces up to 110 years in prison and a maximum $225,000 fine when he returns to Common Pleas Court for sentencing on March 8.
[...]
Manis, who claims to be a 13-year member of the Aryan Nation, told Kurzhals he became enraged after learning that the prostitute he brought home for sex was pregnant with a bi-racial man’s child. “I think the factor was me having sex with a pregnant prostitute with a black baby in her belly and her cussing at me and calling me names,” Kurzhals quoted Manis in an 18-page report that talks about Manis’ mental condition at the time of the offense. “She said something like a white racist bastard like you is why her kid won’t have a chance…and that’s when I punched her in the (expletive) face.”
[...]
“This is one of the most heinous crimes that I’ve seen and these charges are extremely serious. Kidnapping someone, nailing them shut in a closet and then pulling them out to rape them is a person’s worst nightmare,” he said. “Tonight our community is safer with him off the street.” According to court records, the woman told Hamilton police she went to Manis’ house to have paid sex with him after meeting him in front of the Club Car Bar at Maple and East avenues.

She said Manis beat her with handcuffs and dragged her by the hair into the bedroom closet and then bound and gagged her. He nailed the door shut and only removed her from the closet to be raped twice a day and for a bath and food every other day.

Time to start deporting all white people I guess.

No sane person is saying deport people because of their skin color. If Manis is an illegal alien then deport him but he isn't so you present a pathetic false equivalency argument. Come back when you have something worth discussing.

I know this is confusing for people with no background in the law, but Manis isn't an illegal alien.

He wasn't deported. He didn't reenter the country multiple times. He wasn't detained ahead of his child-rape and had his name run through ICE's database.

Racism and moral equivalency: the two crutches of the liberal ideology. Try to find a liberal argument absent of either.