In Memoriam: Jack LaLanne, In His Own Words

Jack LaLanne, the father of the modern fitness movement, was legendary for his strict diet, gladiator-style workouts and lifelong devotion to healthy living. He passed away Sunday at age 96 -- a blow to many of us who thought the man was immortal. And rather than recast his biography, I'll let the man speak for himself through some of my favorite quotes. 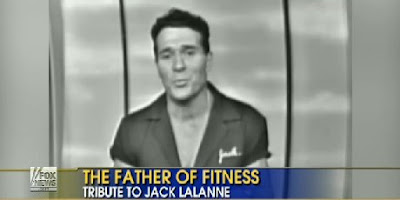 • "Coaches told some of the pro athletes who wanted to come to me to stay away or they'd get thrown off the team. They said I'd make athletes muscle-bound. One time... it was during World War II, I took the entire University of California football team out to the sand dunes near Cliff House in San Francisco. I grabbed the heaviest guy and put him on my back, and I ran up the dunes. Then I made each of them do it. Nearly killed them! They were heavin' all over the place!"

• "I train like I'm training for the Olympics or for a Mr. America contest, the way I've always trained my whole life. You see, life is a battlefield. Life is survival of the fittest... How many healthy people do you know? How many happy people do you know? Think about it. People work at dying, they don't work at living. My workout is my obligation to life. It's my tranquilizer. It's part of the way I tell the truth--and telling the truth is what's kept me going all these years."

• "Don't talk age! Age has nothing to do with it. One of my guys who started out at my gym is 87 now, and he still does ten bench-press reps with a hundred-pound dumbbell in each hand. He's training to set a leg-pressing record. I put things in the guy's brain way back when, and now he'll never get away from it."

• "Thoughts are things. Negativity is what kills you... It's tough to do, but you've got to work at living, you know? Most people work at dying, but anybody can die; the easiest thing on this earth is to die. But to live takes guts; it takes energy, vitality, it takes thought. . . . We have so many negative influences out there that are pulling us down. . . . You've got to be strong to overcome these adversities . . . that's why I never stop."

• "...most Americans these days—they want to overeat, overdrink, smoke and not exercise, and then they go to the doctor saying, "Give me a magic shot, doctor, so I can feel better and look better." They all want that, but as I said, there is a price to pay. Living is tough, it's hard, and most people, especially religious people, spend too much time on their spirituality, hoping that this spiritual thing is going to do something for them. It doesn't work that way!"

• So that's how I get my reward. Can you put a price on a life? If you can save somebody's life, get that person to reduce their weight or get these older people working out, well, look what you've done—you've saved a life, the most precious thing there is!"

• "Now a lot of people say, "Oh, I don't have the time." Or, "Oh, but I don't like it, Jack." But you know, I try to get to the gym by five in the morning, and I work out for two hours. To leave a hot bed and a hot woman to go to a cold gym—now that's dedication! And I've never heard this once—knock, knock, knock on the window in my gym: "Jack, this is Jesus, I'll work out for you today!"" 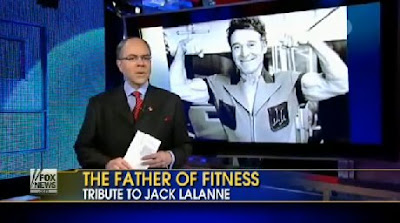 • "I get so ticked off. People are so misinformed these days. They tell you to eat no starch, no fats, to sell a diet, to make money. Where can you get a better food than nuts and grains? ...Would you give your dog a cigarette and a doughnut for breakfast every morning? People think nothing of giving themselves that for breakfast, and they wonder why they don't feel good."

• "The average person who is 70 or 80 is over the hill... They're fat, they're racked with aches and pains. Then you get people over 90 who are running marathons, because they worked at living. I have a lot of energy and you know why? Because I use it. It's use it or lose it, and it's believing in something. Most people just go through life existing, waiting for retirement. That's the death knell."

• "If you can't afford a half hour three or four times a week taking care of the most priceless possession, your body, you've got to be sick. You're stupid."

• "If man makes it, I don't eat it. I practice what I preach. I eat 10 raw vegetables, 5 pieces of fruit, egg whites and fish for protein, and whole grains. Finally, if you can't have a sense of humor, you're dead."

• "My whole career, doctors and so-called experts called me a crackpot and charlatan... But I was right... I train two hours every day. I do an hour and a half of weight training, then maybe a swim or a walk. I like change. I change my program every 30 days. You know, you get bored. The only thing I don't change is my wife."

• "Sitting around on your big fat gluteus maximus talking about the good old days. The good old days are right this second. You've got to exercise VIG-OR-OUSLY! Life is tough. Life is a challenge. Life is a battlefield... . Life is an athletic event, and you must train for it."

Rest In Peace, Mr. LaLanne. Your legend lives on.

at 7:32 PM
Email ThisBlogThis!Share to TwitterShare to FacebookShare to Pinterest
Labels: Nutrition, Workouts

My dog would kick my ass if he didn't get his smoke and a cup of joe before his morning walk-seriously, I loved this guy.

It looks like juicing paid off for Jack. 96 is better than 76.