Understanding Leftism In One Photograph

The accompanying photograph illustrates a theme that Mark Levin articulated on the eve of the 2008 presidential election and which Michelle Malkin highlighted in 'The Allure of the Charismatic Demagogue'.

There is a cult-like atmosphere around Barack Obama, which his campaign has carefully and successfully fabricated, which concerns me. The messiah complex. Fainting audience members at rallies. Special Obama flags and an Obama presidential seal. A graphic with the portrayal of the globe and Obama’s name on it, which adorns everything from Obama’s plane to his street literature. Young school children singing songs praising Obama. Teenagers wearing camouflage outfits and marching in military order chanting Obama’s name and the professions he is going to open to them. An Obama world tour, culminating in a speech in Berlin where Obama proclaims we are all citizens of the world. I dare say, this is ominous stuff... 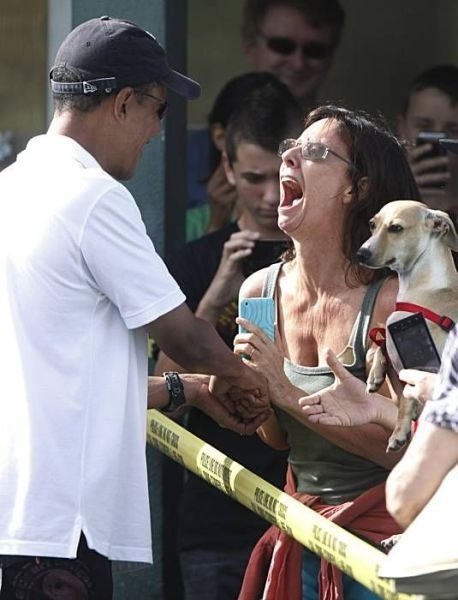 ...Obama’s entire campaign is built on class warfare and human envy. The “change” he peddles is not new. We’ve seen it before. It is change that diminishes individual liberty for the soft authoritarianism of socialism. It is a populist appeal that disguises government mandated wealth redistribution as tax cuts for the middle class, falsely blames capitalism for the social policies and government corruption (Fannie Mae and Freddie Mac) that led to the current turmoil in our financial markets, fuels contempt for commerce and trade by stigmatizing those who run successful small and large businesses, and exploits human imperfection as a justification for a massive expansion of centralized government...

How prescient he was.

Fortunately, the majority of Americans are decidedly un-drone-like, as opposed to the nincompoop pictured above (the one on the right). The 2010 elections demonstrated that legacy media's agenda can be defeated. We must continue to block the socialist agenda in 2012 if we are to save this Republic from the strangling embrace of a charismatic demagogue.

That's an incredible picture, and excellent commentary as well.

Don't forget the "President Elect" seal that they displayed.

I met Obama during the 5 minutes between being elected Senator and deciding to run for President.

Come on now, at least specify the "human" nincompoop on the right. That looks like a pretty intelligent dog.

Looks like she is waiting form him to spit in her mouth.

I don't think it was spit she was waiting for...