President Obama: I will not rest in my relentless, partisan attacks no matter how obvious my incompetent handling of the Gulf spill becomes

In a departure from his nearly 12-hour stretch of post-partisanship, President Obama launched a blistering attack on Republicans while brushing over the environmental disaster unfolding in the Gulf of Mexico. 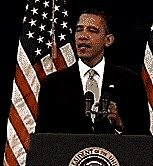 [Obama accused] Republicans of sucking up to corporations, hewing to a bankrupt economic ideology and peddling tried-and-failed tax breaks for the rich.

"[A] good deal of the other party’s opposition to our agenda has also been rooted in their sincere and fundamental belief about government," Obama said. "It’s a belief that government has little or no role to play in helping this nation meet our collective challenges. It’s an agenda that basically offers two answers to every problem we face: more tax breaks for the wealthy and fewer rules for corporations."

At this point in the speech, a loud snapping noise was heard near the stage as the needle on the Presidential Hypocrisy Meter shattered into thousands of pieces. The President later apologized for the gaffe, admitting he had been the recipient of the most campaign contributions from the bankrupt lynch-pin of the housing disaster: Fannie Mae.

The President's criticism of the free market reflected his deep experience as a Constitutional lecturer. His study of the founding document has discovered what others have not: a little-known mandate buried deep within the Constitution that broadly endorses collectivism and Marxism. 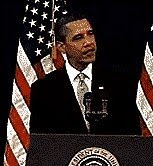 "As November approaches, leaders in the other party will campaign furiously on the same economic argument they’ve been making for decades. Fortunately, we don’t have to look back too many years to see how it turns out. … They gave tax cuts that weren’t paid for to millionaires who didn’t need them. They gutted regulations, and put industry insiders in charge of industry oversight. ...

And despite all their current moralizing about the need to curb spending, this is the same crowd who took the record $237 billion surplus that President Clinton left them and turned it into a record $1.3 trillion deficit."

The architects of the Clinton-era surplus -- the Republican House of Representatives that actually created the federal budget during the Clinton Presidency -- could not be reached for comment.

Obama went on to blame the Gulf oil spill, Al Gore's divorce from Tipper, the Jihad flotilla, and the Sestak affair on Emperor Chimpatine McBushlitlerburton.

He is demonstrating incompetence. His plan is "BP is Bad, BP is going to pay, bad BP." He has not gotten the government out of the way of the folks who can get stuff done like Jindal. It is sad that the the more his incompetence is demonstrated, the shriller he gets.

This guy is lost and flailing. It's pathetic, and so is he. Affirmative action presidency is crumbling before our eyes.

And the winner of the oil leak mess is.........Toyota. Not one mention of unintended acceleration in three weeks.

and this is going to get substantially uglier before 2012.

Not sure if you meant the Gore breakup jokingly, but it appears as though CBS News reports that Bush is to blame.

He seems to forget how GM and Chrysler sucked up to him last year for their bail out.
I dont recall Ford sucking up.
Also seems funny that GM has the goberment almost paid for and Chrysler is no mention of even paying it back.