Another day, another scandal for the 'most ethical Congress evah'.

The pint-sized yenta Babs Boxer, who -- by my count -- has been in the Senate since 1914, appears to have gotten herself entangled in Maxine Waters' latest scandal. 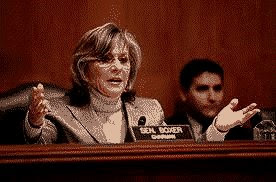 Sen. Barbara Boxer (D-Calif.), Chair of the Senate Ethics Committee, has paid some $30,000 since 2004 for the endorsement of embattled Rep. Maxine Waters (D-Calif.) in the context of a scheme that critics charge is unethical and amounts to Waters using her political station to benefit her family members...

According to the Washington Times, Waters “has turned political endorsements into a family business, using federal election laws to charge California candidates and political causes to include their names as her personal picks on a sample ballot, or ‘slate mailer,’ she sends to as many as 200,000 South Central Los Angeles voters.”

The slate mailer business, it turns out, is run by Waters’ daughter, Karen, via her public relations firm. Records show that Karen Waters’ firm has been paid more than $350,000 since 2004, and has billed a further $82,000 since California’s June primary, for its services in this regard.

It is a scheme that has been criticized by good governance groups including the Sunlight Foundation and Citizens for Responsibility and Ethics in Washington (CREW).

...In 2004, Boxer paid $25,000 for Waters’ endorsement.  But ahead of this year’s California primary—in which Boxer faced no serious competition– and when it was well-known that Waters was under investigation by the House Ethics Committee, Boxer paid Waters $5,000 for her backing.  It is this later payment that those monitoring Waters’ ethical woes say could act as an anchor tied to Boxer’s ankle...

These people are so crooked you can open wine bottles with 'em.

By the way, has someone checked Waters' freezer?

How does Barbara Boxer manage to find enough people, even in California, to keep her even in the polls at this point in time?

I think things are about to shift in Carly's favor.
.