CBO: Repealing Obamacare would slash the budget deficit, save seniors' lives and resurrect Elvis. Not necessarily in that order.

Rep. Paul Ryan (R-WI) asked the Congressional Budget Office (CBO) to score the proposed repeal of Obamacare using real accounting. By that I mean they omitted the Democrats' double-counting gimmicks, "doc-fix" frauds and similar Ponzi-style sleight-of-hand. The result was stunning.

The Congressional Budget Office, in an email to Capitol Hill staffers obtained by the Spectator, has said that repealing the national health care law would reduce net spending by $540 billion in the ten year period from 2012 through 2021. That number represents the cost of the new provisions, minus Medicare cuts. Repealing the bill would also eliminate $770 billion in taxes. It's the tax hikes in the health care law (along with the Medicare cuts) which accounts for the $230 billion in deficit reduction.

Oh, and look at this.

Blue Cross and Blue Shield of California just filed to increase individual premiums up to 59%. 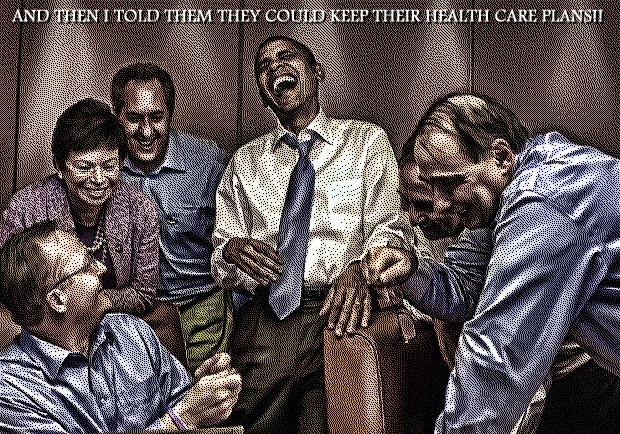 But I'm sure that's Bush's fault too, Nancy.

I thought President Obama said that if we liked our health care plans we could keep them. That our premiums would go down an average of $2,500 per year. And that all pre-existing conditions would be covered (even though that doesn't even apply to Medicaid and the VA today!).

The lies that this administration and Congressional Democrats told in order to slam this bill into place -- with no one bothering so much as to even read the bill -- will go down in history as one of the most egregious crimes ever against the American people.

I didn't realize it was humanly possible to lie out both sides of a mouth until listening to BHO.