Update: Despite receiving numerous reports that Giffords had passed away, the attending surgeons at the local hospital state -- thankfully -- that she is still alive and are "about as optimistic as it can get in this situation". 18 people were reported as shot; one of the fatalities was a 9-year old girl. 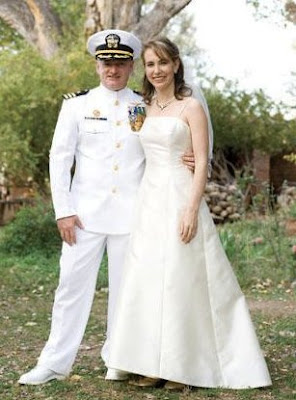 This is Rep. Gabrielle Giffords on her wedding day in 2007. Our thoughts and prayers go out to her husband, family members, staffers and friends.

Rep. Gabrielle Giffords (D-AZ) was shot and killed at a shopping center in Tucson Arizona earlier today. CNN reported that as many as a dozen others were wounded or injured in the incident.

An employee at a store nearby told a reporter for CNN that he heard a series of shots. The shooting occurred at a Safeway supermarket during an event Ms. Giffords called "Congress on Your Corner."

The New York Times notes that these types of constituent events allowed residents of the Arizona 8th Congressional District to meet with her individually. In one such event in 2009, the Times notes, "a protester was removed by police when his pistol fell on the supermarket floor."

In March, the glass front door of her office was reportedly broken just hours after the House vote to pass the Democrat health care overhaul.

Ms. Giffords was 40 years old and was married to a NASA astronaut and Naval aviator, Commander Mark Kelly.

at 3:09 PM
Email ThisBlogThis!Share to TwitterShare to FacebookShare to Pinterest
Labels: Urgent

@Anon: CNN and NPR both reported that she passed away.

Is this not a smoking gun for concealed carry?

For days you have been calling them lairs and now all of a sudden CNN, NY-times and NPR are regarded as reliable sources?
I don't understand you Doug. If you truly want to crush the liberals why aren't you happy now?

Because I believe in the civil society, the Constitution and the Declaration of Independence.

I believe in our highest laws, not lawlessness, which is the Democrat agenda.

As for CNN and NPR, why would anyone (Fox included) lie about such a thing?

And when have I stated such?

Now begone, miscreant, before I taunt you a second time.

Rumors of her death have been greatly exaggerated. She's post-op, in critical condition. Prognosis is cautiously optimistic.

How incredibly distasteful to keep this post up especially with all the new information that has come out. Shame on you.

All those in favor of the rights of unregulated militias to bear arms should get in line to wash innocent blood from their hands. It is time for us, as a nation, to take up the unconstitutionality of standing un-regulated militias.

I teach history here in Germany. Those people who think that words and incitement to violence can be fobbed off and taken lightly should come to visit and learn what their country fought against. I fear what's going on in America where people's ideas are not debated, but instead the people themselves are attacked. Already last week one guy was using the media to argue that Michael Vicks should be executed (no doubt given his race). Palin has constantly used this language which appeals to the type of ignorant, disadvantaged and uneducated group of people that makes up her base and has never been called for it. The irony is that Giffords had, and look where she is now (although she herself was an advocate of gun ownership). If Palin's incitement is no big deal then why did she wait until someone was attacked to delete the image?

Comment of the day award goes to Keir, IMO.

Obama: ‘If They Bring a Knife to the Fight, We Bring a Gun’.