The Tea Party Conservatives Came to Washington to Chew Bubblegum and Kick Ass. And They're All Out of Bubble Gum.

I really like the sound of our guys on the Sunday talk shows. 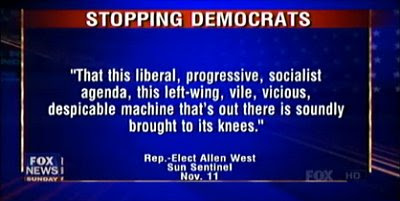 Q: Then, in November, you said -- and here's the quote -- "that this liberal, progressive, socialist agenda... this left-wing, vile, vicious, despicable machine that’s out there is soundly brought to its knees..." Tyrannical? Socialist? Despicable? Is it really as bad as that?

...This liberal-progressive agenda is the antithesis of who we are as a Constitutional republic."

As for some of the other highlights, Darrell Issa probably kerploded a few progressives' heads today by calling the Obama administration corrupt.

Issa ... clarified that when he previously said during a radio interview that Obama "has been one of the most corrupt presidents in modern times," he was referring to the Obama administration and not the president himself.

"In saying that this is one of the most corrupt administrations, which is what I meant to say there," Issa said, "when you hand out $1 trillion in TARP just before this president came in, most of it unspent, $1 trillion nearly in stimulus that this president asked for, plus this huge expansion in healthcare and government, it has a corrupting effect..."

...He also took aim at the national health care overhaul, which he said is "expanding Medicaid mandates that have been at least tentatively ruled unconstitutional," and at the Troubled Asset Relief Program, which he called "$800-billion worth of walking-around money."

Oh, and Michelle Bachmann laid a rhetorical beatdown on the loathsome White House adviser Austan Goolsbee who had earlier warned Republicans against 'playing chicken' with the national debt ceiling as it could raise questions about America's ability to repay its debts. Uh, schmuck: S&P and other rating agencies have already raised questions, thanks to your insane spending policies.

In an entertaining but ultimately not very informative roundtable, guest host Harry Smith brought Reps. Michele Bachmann (R-Minn.), Anthony Weiner (D-N.Y.), Debbie Wasserman Schulz (D-Fla.) and Rep.-elect Mike Kelly (R-Pa.) together for a chat that frequently degenerated into the guests talking over each other. Bachmann said the Republicans would introduce a "clean" bill to repeal the new health-care law. Kelly said he hopes that incoming GOP freshmen, many of whom are backed by the tea party, can force the government to live within its means like people in the "real world..."

Both Bachmann and Kelly said they opposed raising the debt ceiling.

Anthony Weiner went on to shriek like a little girl -- or maybe that's his real voice, I wouldn't know -- that failing to raise the debt ceiling would "shut the government down."

So let's give it a shot for a month or two. I think we'll all be amazed how little we miss the enormous federal bureaucracies that seem to exist only to torment us.

A lot of good may it do us to see some ass-kicking while we're being criminalized, attacked, and jailed in the re-education camps of the judicial system and the Civilian National Security Force.

The courts will not be undermined by ANY power of Congress. And the courts are corrupt. God help us all.

Col West is the man
MM

That IS Anthony Weiner's normal voice, he always shrieks like a little girl. I live in NY so I see entirely too much of him on local TV news shows.

i am a huge supporter of Allen West, as I watched him yesterday i just kept thinking to myself, "God willing, this is our next President". I can think of no other Republican better suited for the job or better able to make obama and the left wet their pants. He also is one of the only members of the GOP who is not afraid to honestly address the problem we have with islamic supremacism. Allen West is the anti-dhimmi, and with him as President, our enemies would not be so quick to attack us; just like how Ronald Reagan struck fear into the back hearts of our enemies, so would Col. Allen West.