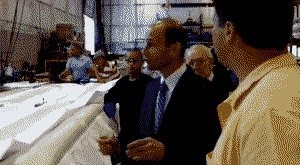 Jim Hoft reports that, while an ecological disaster unfolds in the Gulf, the oil booms that could be used to help mitigate the damage are sitting... in a freaking warehouse.

And no one -- not the Department of the Interior, not DHS, not BP, not NOAA, not the EPA, not the Minerals Management Services, no one has bothered to pick them up. Or have them shipped to the Gulf.

There are miles of floating oil containment boom in warehouse right now and the manufacturer Packgen says it can make lots more on short notice. There’s just one problem... No one will come get it... 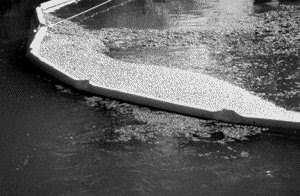 John Lapoint of Packgen in Auburn, Maine, says he’s got plenty of floating oil containment boom and can make lots more on short notice. There’s just one problem: no one will buy it from him.

He’s already had a representative from BP visit his factory and inspect his product... Maine Senators Olympia Snowe and Susan Collins wrote a letter on May 21 to the secretary of the Interior, the administrator of NOAA, and the commandant of the Coast Guard to alert them to the existence of Packgen, their supply of boom, and their demonstrated capacity to make more...

...Oil collected against a boom is fairly easy to process and recycle. Sorbent booms, designed to collect oil at the water’s edge, are made from materials that absorb oil but not water — unlike hair. Oil full of hair or straw lapping against a shoreline is a HazMat nightmare... 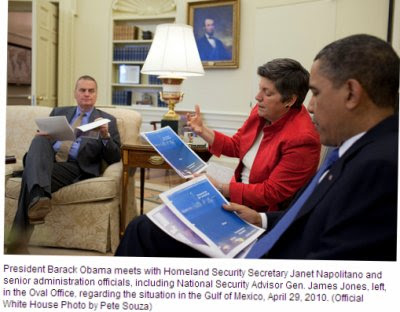 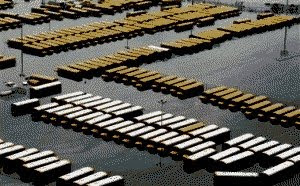 Every waking moment, remember, they've been thinking about this catastrophe. In between the parties, golf trips, fundraisers, and staged propaganda events town halls.

Hoft recalls Ray Nagin's hundreds of school buses that ended up flooded when instead they could have transported New Orleans residents out of harm's way. That was another Democrat success story.

We have live returns from all 12 State's Primaries posted now on Common Cents...

Is incompetence an impeachable offense?

Sickening. And the fact it's not surprising is more sickening still.

One only needs to examine his “get tough” moment on NBC (the official sponsor of Hopenchange):

“I was down there a month ago, before most of these talking heads were even paying attention to the gulf. A month ago I was meeting with fisherman down there, standing in the rain talking about what a potential crisis this could be. And I don’t sit around just talking to experts because this is a college seminar, we talk to these folks because they potentially have the best answers, so I know whose ass to kick.”

Ahem, Mr. President. If I might suggest a few points of consideration:

1: Those “talking heads” have been on the story since day one.
2: For a more comprehensive strategy, a wider base of “experts” than fishermen might be considered.
3: Perhaps action on mitigating the disaster, versus sitting around talking and questionable threats of ass-kicking might prove more effective.
4: Don’t complain about standing in the rain, you marshmallow.
5: Didn’t any of the expert fishermen suggest that equipment works better in the field than in a warehouse? How many expert fishermen did you sit around talking to?
6: Instead of sitting around talking about kicking ass, perhaps you could get off your own and do your job? Perhaps this might have kept a “potential crisis” from becoming an actual one.