Gulf rig owner Mariner Energy: It's not paranoia if they really are trying to kill you

Someone must have sobered up at ThinkProgress when they allowed Ben Armbruster to post "One Day Before Its Gulf Oil Rig Exploded, Mariner Energy Said Obama ‘Is Trying To Break Us’ With Moratorium".

Now, I'm no conspiracy theorist, but the entire scenario is bizarre. It it were the plot of a Tom Clancy novel, it would be considered too far-fetched. 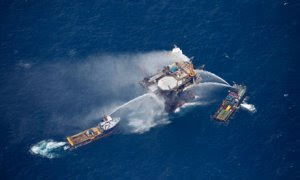 The U.S. Coast Guard said this morning that a natural gas and oil drilling platform exploded 80 miles off the coast of Louisiana. A Coast Guard spokesperson said the platform, Vermilion Oil Rig 360, is an oil and gas platform in 2,500 feet of water and is owned by Houston-based Mariner Energy. It is not currently producing oil or gas...

Just yesterday, however, the Financial Times reported that employees from Apache and Mariner, along with thousands of oil industry workers, rallied in Houston to protest the Obama administration’s offshore drilling moratorium that was designed as a safety precaution after BP’s disastrous Gulf oil spill. A Mariner Energy employee chastised the Obama administration for its drilling moratorium, which would not have affected the rig that exploded today:

Companies ranging from Chevron to Apache bussed in up to 5,000 employees to the Houston convention centre to underline to Washington the industry’s contribution to the country. [...]

“I have been in the oil and gas industry for 40 years, and this administration is trying to break us,” said Barbara Dianne Hagood, senior landman for Mariner Energy, a small company. “The moratorium they imposed is going to be a financial disaster for the gulf coast, gulf coast employees and gulf coast residents.”

...Thirteen workers were on the rig when it exploded; the Coast Guard has said that “all 13 workers involved in the production platform explosion are accounted for, but one person is injured.”

As expected, Armbruster conveniently forgets to report that "Interior Secretary Ken Salazar and the Obama job-killing machine [just got] kicked in the ass one more time... They wanted federal judge Martin Feldman to dismiss the drillers’ lawsuit challenging their original moratorium. No dice."

"It it were the plot of a Tom Clancy novel, it would be considered too far-fetched."

So was crashing an airliner in Washington, D.C.