Hussman: Fed setting the stage for a dollar collapse

A week ago, the Federal Reserve initiated a new program of "quantitative easing" (QE), with the Fed purchasing U.S. Treasury securities and paying for those securities by creating billions of dollars in new monetary base. Treasury bond prices surged on the action. With the U.S. economy predictably weakening, this second round of quantitative easing appears likely to continue. Unfortunately, the unintended side effect of this policy shift is likely to be an abrupt collapse in the foreign exchange value of the U.S. dollar. 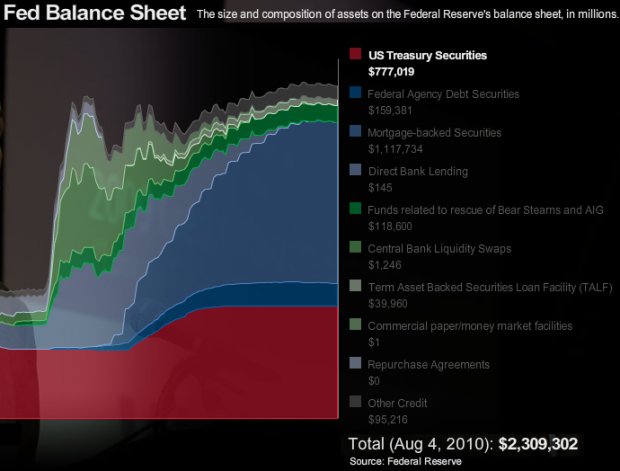 ...the Federal Reserve has begun to play with fire, the effects of which I doubt Bernanke fully appreciates... My impression is that Ben Bernanke has little sense of the damage he is about to provoke. A central banker who talks about throwing money from helicopters is not only arrogant but foolish. Nearly a century ago, the great economist Ludwig von Mises observed that massive central bank easing is invariably a form of cowardice that attempts to avoid the need to restructure debt or correct fiscal deficits, avoiding wiser but more difficult choices by instead destroying the value of the currency...

...Good policy is not rocket science. It begins with the refusal to make people pay for mistakes that are not their own. This economy continues to struggle with a fundamental problem, which is that debt obligations exceed the ability to service them. While policy makers have done everything to preserve the patterns of spending and consumption that created the problem in the first place, we have done nothing to restructure those obligations.

To the extent that we observe fresh credit problems, we should not pursue the same policies. Instead, we should focus on restructuring debt. Let the bank bondholders fail, and defend depositors and customers through the standard procedures that the FDIC has followed for decades. Deal with the debt of Fannie Mae and Freddie Mac by asserting that there is no explicit government guarantee, and let the holders of the mortgage pools receive precisely what they are entitled to receive without public funds. At the same time, expand the role of the FHA to provide explicit government guarantees for future mortgages in return for actuarily fair risk-based premiums, and require mortgage originators to retain a piece of the mortgage loan, along with appropriate capital requirements, and the stipulation that this retained portion bears the first loss if the mortgage goes bad. Finally, refuse to trot self-interested bank and Wall Street executives in front of the public to extort the nation through fear of the word "failure." Banks fail all the time and customers don't lose a cent. The only implication of failure is that stock and bondholders of reckless institutions aren't rewarded for their malinvestment at public expense.

Shhh... quiet, please! Don't tell the 'progressives' that Goldman Sachs and other 'too big to fail' bankers gave the majority of their campaign donations to Obama and the Democrats.