You've got give WTNH some points for creativity. 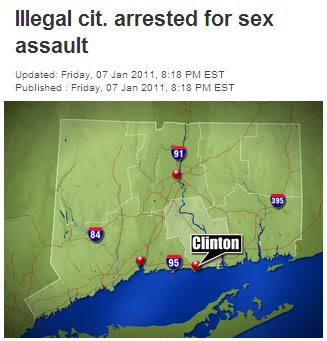 CLINTON, Conn. (WTNH) - An arrest was made after a four month investigation involving a 19-year-old girl who was sexually assaulted by illegal citizens.

Police say two men who are both from Ecuador have been arrested for the crime.

William Matute 36, and Carlos Celi 29, originally from have had federal detainers placed on them pending their deportation back to Ecuador.

The investigation alleges that Celi assisted Matute in the crime, but did not have sexual contact with the victim.

Both Celi and Matute will be arraigned in Middletown Superior Court on Jan. 10.

'Illegal citizen'? It would appear legacy media will do anything to confer rights on non-citizens while they race to blame actual citizens -- especially conservatives -- for random acts of madness.

at 10:14 AM
Email ThisBlogThis!Share to TwitterShare to FacebookShare to Pinterest
Labels: Crime, Democrats, Immigration, MSM

If you're not a citizen, you are a non-citizen, whether here legally or illegally! What freaking jackasses! The correct term for someone who snuck into this country illegally to take advantage of us is: CRIMINAL ALIEN INVADER!

"Illegal citizen" is akin to a "square circle."

See how they covered the AZ shooting if you need confirmation that they are a leftist propaganda arm.

Wow, I guess my green card makes me a citizen then, because I'm here legally.