The Poisonous Paul Krugman and Kos: Willing to Use Evil and Madness to Advance Their Political Agenda [Updated]

It took roughly seven seconds after the shooter was tackled in Tucson for the despicable loon known as Paul Krugman to blame conservatives.

The New York Times' Paul Krugman writes, "You know that Republicans will yell about the evils of partisanship whenever anyone tries to make a connection between the rhetoric of Beck, Limbaugh, etc. and the violence I fear we’re going to see in the months and years ahead. But violent acts are what happen when you create a climate of hate. And it’s long past time for the GOP’s leaders to take a stand against the hate-mongers."

In his eagerness to tar the alleged Arizona shooter as some sort of conservative tea-bagger, Paul Krugman has once again proven that he is completely unhinged.

Krugman's not the only one. The malevolent crackpot known as Kos is knee-deep in his usual agit-prop, blaming Sarah Palin for the shootings.

Turns out, however, that making political hay out of this tragedy -- while par for the course for the Leftists -- is so far off base that it's quite literally sickening.

A classmate of the man accused of shooting Congresswoman Gabrielle Giffords this morning describes him as "left wing" and a "pot head" in a series of posts on Twitter this afternoon... [she] paint[s] a picture of Jared Loughner as a substance-abusing loner who had met Giffords before the shooting. She says, Loughner described the congresswoman as "stupid and unintelligent."

...Parker "tweets" that she and Loughner were in the band together and were friends until 2007 when he became "reclusive" after getting alcohol poisoning and dropping out of college... She describes him as "quite liberal" and as a "political radical."

Saturday afternoon, police surrounded a house at 7700 N. Soledad Ave., which is the address listed by a man with the same name on a variety of online accounts and in the volunteer registry for the 2010 Tucson Festival of Books. The home is near West Magee Road and North Thornydale Road on the northwest side, about five miles from the shooting scene... The suspected shooter has made death threats before and been contacted by law-enforcement officers, but the threats weren't against Rep. Gabrielle Giffords, Dupnik said. The suspect is unstable, Dupnik said, but the sheriff would not say he is "insane." 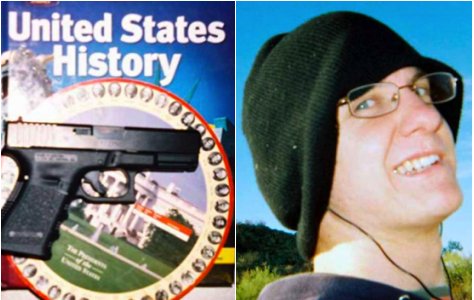 A former classmate of Loughner at Pima Community College said he was "obviously very disturbed... He disrupted class frequently with nonsensical outbursts," said Lynda Sorenson, who took a math class with Loughner last summer at Pima Community College's Northwest campus... Sorenson doesn't recall if he ever made any threats or uttered political statements but he was very disruptive, she said. He was asked to leave the pre-algebra class several times and eventually was barred from class, said Sorenson, a Tucson resident.

Another Pima classmate, Lydian Ali, said Loughner would frequently laugh aloud to himself during the advanced-poetry class they attended. Only about 16 people were in the class, so Loughner's behavior stood out, Ali said.

As for Kos: Daily Kos blogger BoyBlue is alleged to be Loughner. 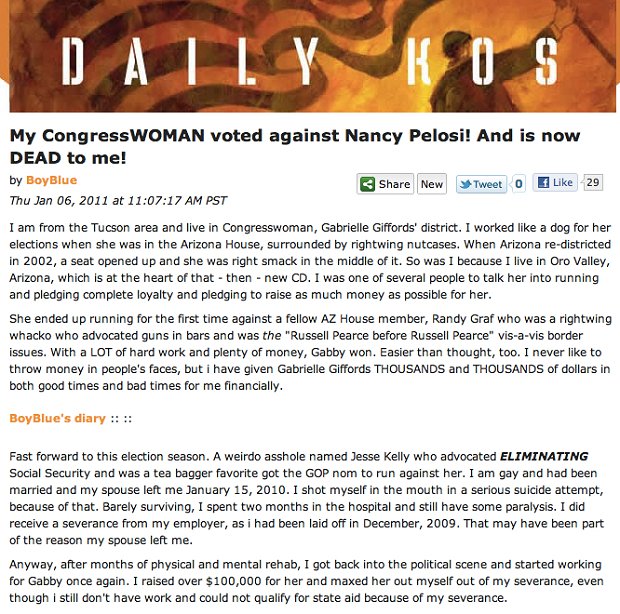 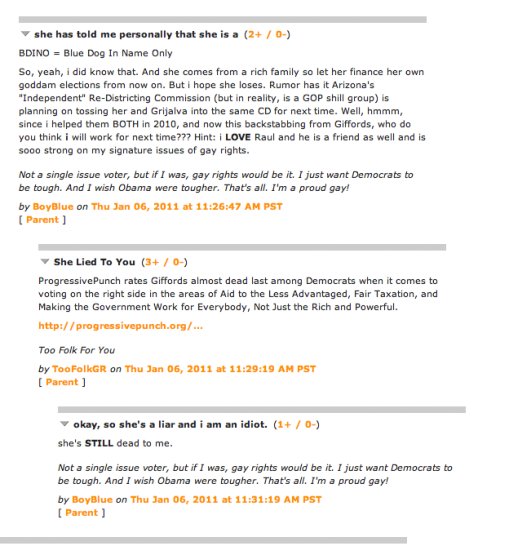 And Democrats -- including Kos -- routinely use bullseye symbols in their graphics. 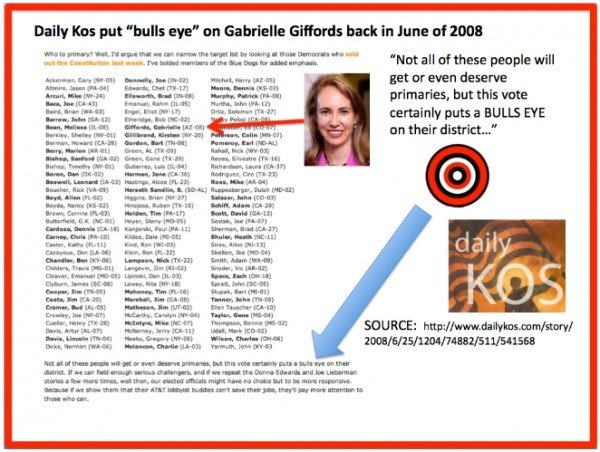 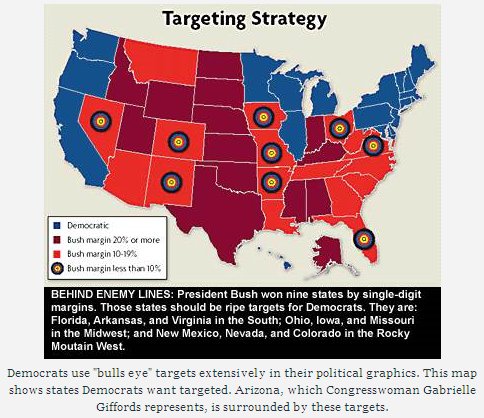 The poison spilled by Krugman and Kos is harmful to society, for they are happy to use pure evil and madness to advance their political agenda.

A democratic operative admitted this to The Politico. Of course, Politico buried it in their story.

One veteran Democratic operative, who blames overheated rhetoric for the shooting, said President Barack Obama should carefully but forcefully do what his predecessor did.

“They need to deftly pin this on the tea partiers,” said the Democrat. “Just like the Clinton White House deftly pinned the Oklahoma City bombing on the militia and anti-government people.”Another Democratic strategist said the similarity is that Tucson and Oklahoma City both “take place in a climate of bitter and virulent rhetoric against the government and Democrats.”

This Democrat said that the time had come to insist that Republicans stand up when, for example, a figure such as Fox News commentator Glenn Beck says something incendiary.

The shooter was a pro-Marxist, anti-flag, anti-Constitution, anti-religious crackpot. He was hardly a tea partier.

So… Is this why DHS is going after a hate group that just happens to have Gadsden Flags ads on their website?… And, the media is trying to link the pro-Marxist lunatic to the tea party?

Does this really come as a surprise for a Party that lies as a matter of course?

Local NBC reporters went there immediately today. Normally, I would not subject myself to PMSNBC, but I was trying to watch the NFL playoffs which unfortunately were carried by the network today.

I’m not sure if it was like this nation-wide, but here in Arizona, all the pre and post game programming was preempted by nothing-new coverage of the incident. The shooting occurred at around 10:00 local time. Pre-game started at 2:00, and in the thirty minutes before the game, I heard no less than twenty mentions of the Tea Party.

The objective of the Left is to get their narrative out there NOW, while the story is hot. Nobody will ever remember the correction on page 27 that runs in 6 weeks.

Whenever something horrible like this happens, their first thought is always "How can we blame George W Bush?"

The deaths of over 100 million people can be blamed on Karl Marx and his ink pen.

The military term for all of this is "chaff."

When you find yourself out in the open with incoming fire on your tail, you throw as much garbage into the air to confuse the homing radar.

In this case, Kos found himself fully exposed and the Left obliged by scrubbing Google and tossing out ANYthing to add to the post-shooting confusion.

If they can make the simple truth seem too tedious to find, simple and direct targeting goes yawing after the next shiny thing.

I didn't think Krugman or Kos could sink any lower.

This is what leftists MUST do to prepare people for the true acts of brutality and evil that must follow if they are to succeed in fulfilling their Marxist agenda. It was done in Germany, Ukraine, China and other places - opponents of tyranny must first be vilified and dehumanized so that the masses will not flinch when they see that their former friends, neighbors and even family members are rounded up (to get them out of the way) and sent to gulags and death camps. That's how it has always worked, and they know it.