Despite some rumors to the contrary, it would appear that the Ground Zero Mosque isn't moving. New York One reports that Doctor Tolerance ain't going anywhere.

The imam and developers of the of the proposed Downtown Manhattan Islamic community center say that their project is not moving away from a location near the World Trade Center, despite numerous claims during the day that a deal was reached to move the mosque... Imam Feisal Abdul Rauf, developer Sharif El-Gamal and Soho Properties said in statements today that the Park51 Islamic community center and mosque is not moving from the current location on Park Place.

Further, Rauf has amped up the inflammatory rhetoric over the last few days, stating that if intolerant Americans burn a Koran that rampant terrorism will result. 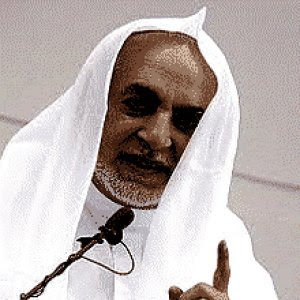 ...capping a daylong rhetorical offensive that began Wednesday morning with an opinion piece in The New York Times, Rauf said he intends to go ahead with the "multifaith" center near the site where Islamic terrorists killed nearly 2,800 people because not doing so would unleash fury abroad.

"If we move from that location, the story will be that the radicals have taken over the discourse," Rauf told CNN. "The headlines in the Muslim world will be that Islam is under attack.

That's what you call a not-so-veiled threat.

In another example of the famed tolerance for which Rauf's world is famous, a new holiday called Burn an American Flag Day was just declared. 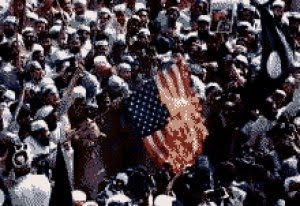 In retaliation for wackadoodle pastor Terry Jones’s Burn a Koran Day on 9/11, a British Muslim activist has called for an international “Burn the Stars and Stripes Day.”

A radical Islamic activist and lawyer in the U.K. has called on Muslims worldwide to burn U.S. flags outside American embassies on Sept. 11, a “direct retaliation” against a Florida church’s plan to burn Qurans on the same day.

Anjem Choudary, former leader of the banned hardline Islamic group Islam4UK, told CBS News in London he was calling for, “an international burn the Stars and Stripes day” on the anniversary of the 9/11 terrorist attacks.


Related: Let me see if I get this straight....

What a shock, more threats from a radical Muslim?

Back when some starting reporting this, I kept thinking these liberal Democrats are eager to burn Bibles, Crosses, Flags, Constitutions, etc., including effigies of some living Americans.

I thought although it was crude, probably misguided, this burning of a Koran was a clear political statement, and a practice of free speech.

Now, I think this entire thing, is yet another enabling mess, in which the very delusional forces within Islam have won.

I almost am thinking I might just burn a Koran on my own, just to make a point, without the fanfare.

Either way, the Clinton - Obama - Reid - Pelosi Leadership is not producing any sort of progress in terms of 'peace', unity, discourse, understanding, etc.

The state of relations around the GLOBE and within the USA is now a disaster, getting far worse with Hillary's Smart Power.

The Democratic Partisan disaster is making a real mess, and they should apologize to the prior Republican led effort, and the Bush Administration, for they simply have proven themselves - these Democrats, to be utterly incopetent, misguided, delusional, corrupt, destructive.

"Rauf said he intends to go ahead with the "multifaith" center near the site where Islamic terrorists killed nearly 2,800 people because not doing so would unleash fury abroad."

Rauf of course wants Americans to believe that he never expected a bit of trouble when he selected Ground Zero for his 9/11 Victory mosque.

"If we don't do things correctly, this crisis could become much bigger than the Danish cartoon crisis [over images depicting the Prophet Mohammed], which resulted in attacks on Danish embassies in various parts of the Muslim world."

That's right - it was a cartoon and not a radicalized religion bent on rage and destruction which resulted in attacks.

Do it because this is yet another attack on free speech, which is one of our most precious rights.

Here You Have Virus E-Mail said...

Subject: Here you have

Instead of burning Korans, I have a better idea.

I think that leftist free speech advocates will be really conflicted if someone posts a pix of a Koran in a jar of urine alongside Serrano's Piss Christ. At the time that outrage was published and cheered by the MSM, leftists were very quick to scold the rest of us about freedom of expression.

As has been their M.O. for decades, the Muslims are trying to use intimidation and fear to force their barbaric Sharia laws upon others. If they succeed in buildind their monument to the victory of 9/11, you may be sure it will be only a first step in the plot to change America as they have in countries around the world.

Heard a guy in the miliary call in on a talk radio show this morning concerning the threat of violence from the Koran burning.

His response: "Bring it on!"

I suspect a lot of Americans feel the same.

Read a couple of books on the American Revolution last week. Prior to Lexington, a broad consensus had formed amongst the American population. George III and Parliament had made it clear that they would remain the boss and Americans would do as they were told. The king announced that he would "bloody a few noses" if resistance, such as the Boston Tea Party, continued.

Our forefathers (and mothers!) prepared. They picked up their rifles, started military training, prepared supplies, and began to lay away ammunition.

When General Gage sent 800 soldiers marching to Concord to seize the arms cache, the Minutemen stood in the way at Lexington Green, essentially saying "Bring it on!"

At some point, we can no longer tolerate insults. Further appeasement will just dig our graves.

Maybe this one event is not the place to draw the line but somewhere, sometime, the line MUST be drawn.