Awesome: Under Barack Obama, the military might of the United States has been reduced to tweeting birthday wishes to mass-murdering dictators

It didn't work out well under Jimmy Carter and it's not gonna end well with this administration.

What am I talking about? Namely, this report from The Hill: 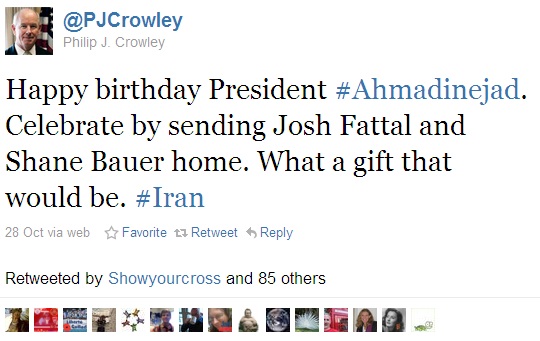 "What a gift that would be," tweeted State Department spokesman Philip Crowley after wishing Ahmadinejad a happy birthday... "Your 54th year was full of lost opportunities... Hope in your 55th year you will open Iran to a different relationship with the world."

Josh Fattal and Shane Bauer, who were arrested while hiking along the Iraqi-Iranian border in July 2009, are imprisoned in Tehran.

This is so freaking pathetic my eyes are tearing up.

What has this country become under Barack Obama? Sending birthday wishes to dictators in the hope they'll release their hostages?

Barack Obama is Jimmy Carter without the spine.

This is another riot.

The Clinton State Department and the OBAMA Folly on display.

Of course, they have so many "smART POWER" embarrassments.

Like this one using taxpayer money to send Artists overseas to be Diplomats.

"The new program, known as smART Power, will be administered by the Bronx Museum of the Arts, which was selected from a dozen institutions to choose the artists. They will be sent to places that include Pakistan, Egypt, Venezuela, China, Nigeria and a Somali refugee camp in Kenya."

Few seem to have noticed, this includes Venezuela - you know, HUGO Country is going to get taxpayer funds via an ARTIST sent their way.

Of course, I do find Mrs. Palin's TWEETS rather less than impressive as well. One has to wonder if these folks even write this stuff themselves. In this case, she has clipped the insight from a few other Conservative offerings.

But such is life with Celebrity and hype.

The tweet should have been phrased as follows --- "Your 54th year was full of lost opportunities... Hope your 55th is your last"

Thanks for the heads up on this story. Yet one more Obamanation! I linked back to your story from my blog.