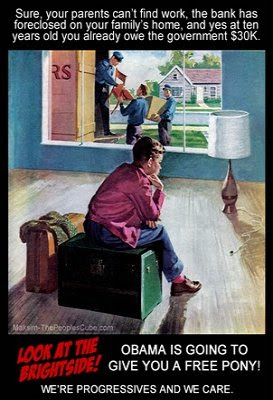 Yes, Nancy, We Give You ALL The ‘Credit’ : Babalu
Union Bosses Blow Millions More in Dues Money: Malkin
Equal funding for charter schools is next frontier in D.C.: WashExam

Is the EPA just protecting the ethanol lobby?: WashExam
A Quick Note to Pennsylvania Voters: CBullitt

Juan Williams and the ObamaCare Death Panels: AT
Obama’s turnout pitch to Latinos: Get out there and punish your “enemies”: Hot Air
Hilarious: 'Obama May Focus On Deficit Over The Next Two Years': RWN

Maine: Woman may have been target of chemical bomb outside mosque: Creeping Sharia
The Curse of the Welfare State: AT
Iran Releases Top al-Qaeda Terrorist Saif al-Adel, Now Back in North Waziristan: WZ

QOTD: "Obama believed, at the time I met him, this was probably around Christmas time in 1980. I'd flown out on Christmas break from Cornell, where I was in grad school. And Obama was looking forward to an imminent social revolution, literally a movement where the working classes would overthrow the ruling class and institute a kind of socialist Utopia in the United States...

...When ever he talks about taxing the richest two-percent? I think he knows that will harm the economy. To him, the redistribution of wealth is extremely important. And he never took economics or science like I did. He went straight to law school, never had any business experience, never had a payroll to meet. And I think he's locked in a very dangerous mindset, where if he didn't fight to redistribute the wealth that he'd be violating [his] ideology." -- Dr. John Drew, President Obama's friend at Occidental College

THANK YOU for posting this!

I have a sad one, another Reihl insanity:

"In lieu of commentary on the substance of Paul's post, Riehl makes a couple of ad hominem assertions. First, he weirdly refers to Paul as our "resident lobbyist." Paul is a practicing lawyer and partner at the Akin Gump law firm concentrating in employment law. He is not now nor has he ever been a lobbyist. I have no idea what Riehl is talking about, and I don't think he does either."

I used to read Reihl often, but his delusional anti-GOP stances were so absurd, it became the source of jokes. This is one of the few sources who are pushing this fashion, which led to the disaster in Delaware.

Conservatism isn't unstable, hostile, delusional, etc., creating mythic cabals and conspiracy theories. That is what the Democratic Partisans often are engaged in. To see this nonsense, is tiresome.

Conservatives best turn away from the nutty Voices who cry insanity, pushing a vapid Identity - IMAGE Authoritarian Movement. It is only weakening the offering, and giving a break to the Disastrous Democratic Party.