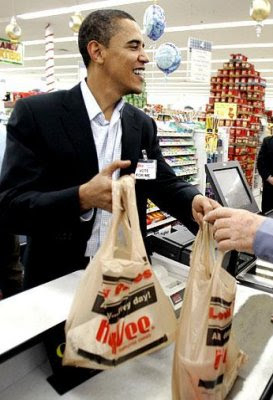 This Will Be The GOP’s Best Chance To Reach Black Americans For A Generation: RWN
It's Only Castles Burning: Belmont Club
There Are Practical Problems With Ending Don’t Ask, Don’t Tell? You Don’t Say: RWN

Virginia Attorney General: Obama Worse Than King George III…: WZ
Politics May Need A Fistfight, But Media Needs A Kick In The Balls: Riehl
Substitute Barack Obama For Rand Paul, and You Get Racism and Islamophobia: LegalIns

Rep. Waxman Spokeswoman: ‘We Do Not Know’ If We Aided Fallujah Terrorists with Code Pink Letter: BigPeace
How Long Can the Iranian Regime Last?: Ledeen
Ah, the Public Sector Unions: As French Strikes Continue, Country Runs Out Of Gas: ZH

Mumbai Plotter Trained With Terrorists While Working for Feds, WIfe of Muslim Terrorist Warned FBI: Atlas
An Enemy Within -- Code Pink and Its Democrat Enablers: AT
Muslim Dances on Altar of Catholic Basilica in Florence: GWP

"What Is Your American Dream?": Althouse
I’ve Been Bought by the Koch Brothers or The Change Purse That Changed My Life: Unsweetened Tea
Obama's Auntie Zeituni Expresses More Charming Opinions: Ace

Great to see Fausta on these links, a great Blogger - top notch.

I see today, the RUSH - Malkin etc., who went down the road to push the fashion and enable the mistake of O'Donnell, trying to spin the latest O'Donnell focus on Church and State.

This is exactly what Democrats want, to not focus on the disastrous Economy created by their horrid policies. They want to focus on these 'stereotypical' images of Conservatives to debase us all as being extreme - in this case pushing Religious Mantras.

Malkin, Rush, etc., fall right in for the folly, by taking the bait, having their egos lead them down the road. No doubt the issue is a worthy offering. GOD and Religion are not to be feared or excluded.

But to turn the focus off of the massive Obama-Pelosi-REID Deficits, failed Stimulus joke, oppressive Obamacare, and to highlight the RACE in Delaware with the weak - easy to debase O'Donnell is a HUGE MISTAKE.

It is the kind of poorly conceived strategy which took hold after 2004, with many of the big wig Conservative Celebrities embracing fashionable reactionary self destruction, which eventually enabled the Democratic Party.

In this case, Democrats want to Nationalize the Race in Delaware with O'Donnell, making her the face of the Conservative Tea Party GOP - exactly why Biden and Obama travel there to campaign. And again, Rush - Malkin, etc., foolishly fall for it. They put their egos on the line for O'Donnell, and cannot accept to turn the page.

And if one wants to take the House and the Senate, it should be a massive focus on JOBS, Deficits, impending Tax Increases, disastrous Economy, rising costs in Health Care due to Obamacare, etc.

This is why Angle did well in her debate vs. Reid, as she did not take the bait and allow the Democrat strategy to label her as an 'extreme', become the focus of the exchange. She hammered in an okay manner, the disastrous Democratic Partisan offering.

O'Donnell on the other hand, is inviting the most weak stereotypes which debase the Conservatives in the face of those outside of Our Community of Devotees. She simply doesn't have the talent or the insight to be able to have such conversations about these issues, and should not be focused on this in the overtly Democrat State of Delaware. It should be about the FREE MARKET vs. Socialist - Collectivism.

Again, in the case of O'Donnell, the choice to focus on "Church and State" is another example of why she is a big mistake for all - a gift for the Democrats at this time. Hopefully, the additional focus of this via Malkin and Rush doesn't end up distracting the more Independent Voters whom we need at this time.

We have allowed some Elite Conservative Pundits send us all off a cliff. The lack of honesty about the GOP offering is really one of the biggest problems. The fashion is not reasoned about the record.