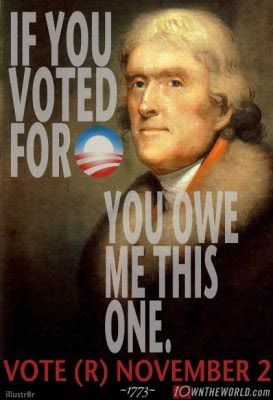 If Karl Rove objects to Palin's show, what would he have said about Reagan?: Riehl
Take Me To Your Whiners: eGad-Fly
At last, Jon Ralston Stars In Harry Reid Commercial: LegalIns

Krugman: The Only Thing We Have Is Fear Itself: Driscoll
What did Mr. Meek stand to inherit?: PJM
RNC Launches 'No More Frankens' Website: RWN

Standing tall: The rise and resilience of conservative women: Malkin
President Obama and the Radical Socialist Agenda: AT

The Odyssey of Islamism in America: AT
Obama on Terror Threat: If We Help Yemen Create Jobs We Will Stop the Islamic Terrorists: GWP
The Free Trade Trap: AT

Given Today’s Activities – What Do You Think Happened in Last Month’s UPS Plane Crash in Dubai?: WZ
NASA Coverup? The 100-Year Starship: Fox
“The Negro Project” Lives On Through Planned Parenthood: RWN

I like LL, but feel Larwyn should really reconsider the Riehl folly.

That is one unhinged wreck, that reminds one of the laughable Democratic Party.

Dan Riehl not only revealed to be totally ignorant in trying to attack Castle, or utterly without ethics, he showed he simply may need professional help with his constant obsession and demeaning of the Powerliners.

He is about as credible as Obama or Pelosi these days.

The Bubble of Our Side, grows a network where folks understandably build associations to grow support and attention.

Riehl is a poison, which ends up sending everyone's credibility down.

There are many who played a fashion, often connected to some irrational anti-GOP hyperbole, which was being exploited for personal gain. This vitriol has often blown over to serious Campaign Competition lowering the bar for many in the cases of Delaware, Alaska, etc. They actually grew opposition and enemies, playing really poor politics, with the hubris and slander being provided. Simply NOT conservative, and many (including the fine Mr. Instapundit), lowered their own bar.

But Riehl is one of the worst, and no matter how time passes, sound Conservatives, like the Elephant, do not forget the problem. It will always end up hurting again, eventually. Simply not a sound source to turn to.