Murkowski, Crist and Specter -- Birds of a Foul Feather

If you're looking for poster children representing the very worst of our political class, look no further than Lisa Murkoskotciewcz and Charlie Crist (D? R?). 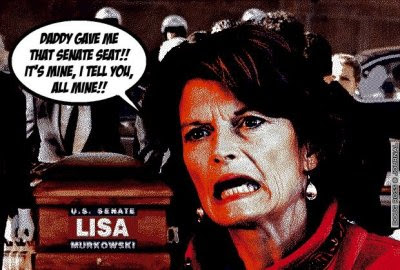 To be sure, they may not be Marxist-Leninists -- as President Obama and Speaker Pelosi appear to be -- but, then again, I don't consider those two politicians so much as enemies of the Constitution. Yes, I said it: you can't take an oath to uphold the Constitution and then state your plain intention to steal private property and redistribute it, like some sort of sixties-vintage Politburo member.

But at least Obama and Pelosi are consistent in their Cloward-Piven-inspired plot to remake America. They're ideological purists. And no amount of history, facts, logic and economic ruin will convince them. No matter how catastrophic for their party these elections turn out to be, neither Pelosi or Obama will change their core philosophies even one iota.

But Murskotwitz and Crist are an altogether different breed. They seek personal aggrandizement, irrespective of ideology. They shift positions, parties and principles like Beltway chameleons in the focused pursuit of wealth, fame and power. 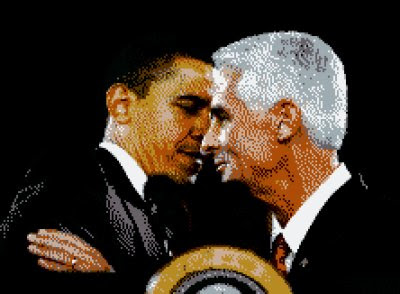 As Dan Riehl stated earlier today, they represent the very ugliest of politics.

Alaskans should reject Murasdowekas, handed a Senate seat by her father as if it were some sort of family heirloom. You can do so by supporting Joe Miller in this critical last week.

Likewise, Floridians should disregard Charlie Crist, an unprincipled hack whose core principles are no more anchored than is a weathervane. Marco Rubio is someone very special indeed, perhaps a once-in-a-generation candidate who could be destined for very great things indeed.

The time for action is now.

I agree with you, hoping Miller wins, and calling for his support.

However, equating Murkowski with Specter or Crist is a stretch. Specter and Crist never came near a 70% ACU rating. Nor is the Murkowski Family so bad in terms of Record in Alaska. No, I did not like the Father - Daughter appointment.

However, again, the Murkowski turning INDY was also a product of how she was treated poorly - unfairly - without class in the Primary by the TEA Party Express and the Palin Franchise. She could have been easily brought along in a pleasant manner - accepting her fate.

But that is politics, and building an Enemy without need, is not sound Conservatism. Very bad politics.

And I tried to warn the likes of Reynolds, Reihl, etc., back then, seeing this eventual as predictable.

Miller continues as well, to remind all, the fluff is not genuine in an Image Identity Movement based on emotion. He should NEVER have been using tax payer money - a Gov. Gig, to practice his personal politics. Never. That is a Conservative no no.

I think this is an essential read about it all, especially learning about this IMAGE game created by frustration, which may be inspiring some poor decisions - weak Candidates.

I believe this expresses a lot of "common sense"...

"Conservatives like to say that the past ten years have taught us the perils of electing mere Republicans, as opposed to solidly conservative Republicans. This is a legitmate lesson. But another lesson from these years, and from the six that preceded them, is the perils of electing candidates with serious character flaws (i.e., major warts). The loss of the House in 2006, which helped pave the way for President Obama's legislative successes, may well have had more to do with the sense that too many Republican members were personally corrupt or badly flawed than it did with the view that Republican members were insufficiently conservative."

It stems from this...
"During the debate Miller admitted that he was once disciplined for violating policy while he worked as a local government attorney. Miller previously had refused to discuss the matter, but eventually made his admission after a judge ordered that the relevant personnel file be released. During the campaign, it has also been revealed that Miller's family received federal government benefits like Medicaid, unemployment and farm subsidies -- benefits he has raised concerns about as a candidate."

This is all regretful, by many of the hyped "IDEAL IMAGES" have proven predictably to be less than super.

Conservatives used to always know humans are imperfect, it matches the mantra of limiting the power of a few over many. Fashion and emotion has many out of frustration vilifying many, but their selections aren't any better in many regards - in fact some are plainly gifts for the Democratic Party Disaster, just as the Maverick TICKET was last time.

Ironically, Mr. Mirengoff was basically slandered by a few, including Mr. Levin on the Delaware fiasco.

He states it well here:
"This lesson has more bearing on 2012 and 2014 than it does on this election, where the die is largely cast. Whatever one makes of this year's Alaska Senate race, we should be wary "warts and all" and "my flaws are your flaws" arguments as a general matter going forward."

We simply should never be giving Senate Seats, or Presidential Races, to the Democratic Party. Never.

"Colorado Tea Party Splinters? Instead of uniting in a final campaign push, the tea-party movement has begun to splinter in Colorado, with rival camps hurling charges and insults at one another."

This Fashion, meaning the TEA PARTY EXPRESS, (not the sound push for serious-conservative GOP Candidates - Gains vs. a disastrous Democratic Party), is looking like another Minute Men, Reform Party, etc., mess.

In a year when we need to check Democrats, when it is essential to empower the GOP (the only tool we have), we are seeing utter sophistry.

Delaware is a symbol of a major problem, Miller is showing cracks, Paul should be up by 15, Angel should be leading by 6, etc.

Cooler - wiser heads prevailed in NJ with Christie, facing the same fashionable distractions. We better get it together now.

If the TEA PARTY EXPRESS proves to be the savior of the Democratic Party, apologies will not suffice. They should be forced to reconsider, perhaps becoming another distant failed memory, and many Conservative Pundits should take up a different calling.

GWB backed every liberal he could find. That is the reason the GOP was creamed in 06 + 08. Yhese are just a few of the lefties the Rove/Bush team backed.