Just hours after news broke that the Obama administration has dropped any pretense at protecting the border comes word that 13 youths were shot dead at a birthday party just a few miles south of El Paso, Texas. 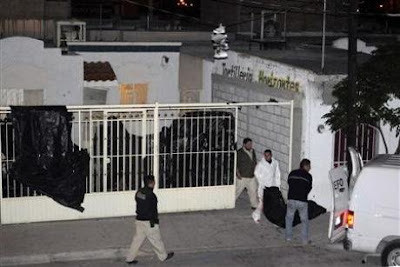 Gunmen stormed a party in the border city of Ciudad Juarez and opened fire, killing at least 13 people and wounding 14 others, authorities said Saturday... The Friday night shooting carried grim echoes of an attack on a Juarez teen party in January that left 15 people dead and raised a national outcry.

In the latest case, authorities said a group of men armed with assault rifles burst into the party, which was being held in two adjacent homes in a neighborhood called Horizontes del Sur... Investigators found signs of more than 70 shots having been fired.

The victims who had been identified were between 16 and 25. A 9-year-old boy was among the wounded... one of the party-goers managed to flee, but was chased down and shot dead between a pair of parked cars.

Officials did not immediately offer a possible motive for the attack, the second time in a week that gunmen have fired upon a house party in Juarez. On Oct. 17, seven people were killed when attackers stormed a home near the city's airport.

Better still, the border which "is as secure as it's ever been" will now be left wide open thanks to the pro-illegal immigration lackey known as Janet NapoliReno.

The Obama administration is preparing to scrap plans to extend the high-tech "virtual" border fence along vast stretches of the 1,969-mile U.S.-Mexico border...

...Homeland Security Secretary Janet Napolitano, a former governor of Arizona keenly familiar with the technical problems afflicting the project, first signaled plans to scrub the "invisible fence" with a series of internal decisions in recent weeks that shifted the year-to-year contract with the prime contractor to a month-to-month contract due to expire on Nov. 21.

Gee, this may sound crazy, but perhaps an administration truly concerned with protecting Americans would build something known as a "real fence".

The failed narco-terror state next door is quickly descending into full-blown civil war. And NapoliReno, her boss, and the rest of the Democrat leadership doesn't care how many American are destined to die.

After all, building a fence would prevent illegals from voting -- and electioneering -- for Democrats in this crucial election.