Paid moonbat activist who lunged at Rand Paul: I wasn't running at the candidate, I was simply trying to escape those evil Nazi teabaggers

I think it safe to say that this election cycle has proven we can leave the real news reporting to the likes of new media superstars Jim Hoft and Michelle Malkin. 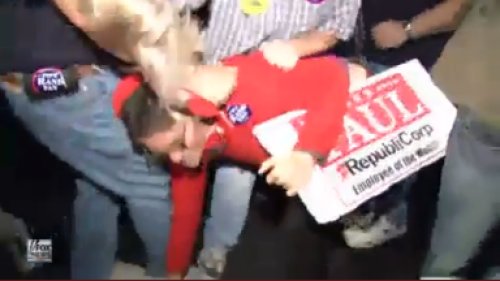 Hoft was among the very first to report today that the extremist crackpot who lunged at Rand Paul is none other than a MoveOn contractor who specializes in leftist rabble-rousing.

The media will make this far left activist out to be a martyr today. We already know that... It certainly was over the line to put a shoe on her shoulder or head... But, Lauren knew exactly what she was doing. She’s had plenty of practice. She’s a professional leftist activist. 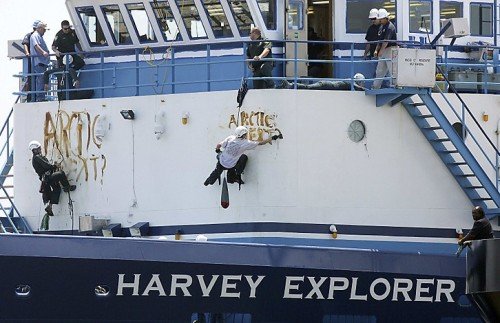 In fact, the Lafourche Parish Sheriff's office published mugshots of seven Greenpeace moonbats arrested on May 24, 2010:

...the seven had boarded a vessel at Port Fourchon and painted messages with an unknown substance on different areas of the ship. The messages were directed to Interior Secretary Ken Salazar. A representative for Salazar was at Port Fourchon this morning while other dignitaries congregated in Galliano with Secretary Salazar and Homeland Security Secretary Janet Napolitano regarding the ongoing oil spill impacting the Louisiana coastline... 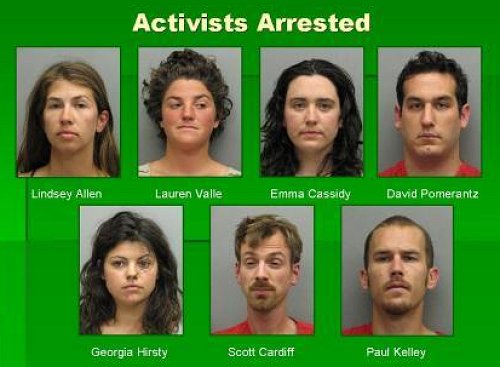 The seven had been seen in the area for the past week and had been repeatedly warned by law enforcement not to hamper clean up operations and not to trespass. Greenpeace is known for pre-planning and coordinating similar protests to bring attention to environmental issues. Pictures of the vandalism appeared on the Greenpeace website within minutes of the arrest of the activists.

Valle was charged with a felony.

Just moments ago, the left's favorite propaganda outlet, The Muffington Coast, published Valle's version of her run at Rand.

I have been at a bunch of events before, the previous debate, and the Rand Paul campaign knows me and they have expressed their distaste for my work before. What happened last night was that about five minutes before Rand Paul's car arrived they identified me and my partner, Alex, who was with me. They surrounded me. There was five of them. They motioned to each other and got behind me. My partner Alex heard them say 'We are here to do crowd control we might have to take someone out.' 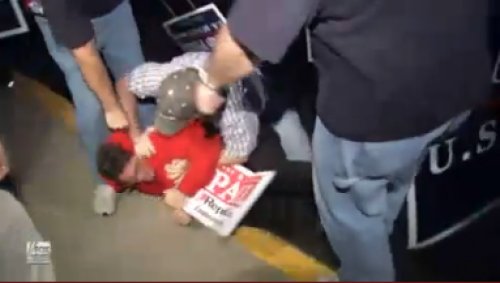 When Rand Paul's car arrived a couple of them stepped in front of me so I stepped off the curb to get around them to get back out front. At that point they started grabbing for me and I ran all the way around the car with them in pursuit. The footage is after I've run all the way around the car and I'm in front of the car and that is when they took me down. One or two people twisted my arms behind my back and took me down... It was about two-to-three seconds after that that another person stomped on my head. And I lay there for 20 seconds or so and my partner Alex came and got me up and that's the point where there is the media clip of me speaking.

Why are paid stooges of George Soros running at Rand Paul? The Associated Press describes the back-story.

Supporters of Republican U.S. Senate candidate Rand Paul wrestled a woman to the ground and one stepped on her head after she tried to confront the candidate in Kentucky...

Lauren Valle of liberal group MoveOn.org, told Louisville station WDRB she was trying to give Paul a fake award when his supporters took her to the ground... Television footage shows Valle’s blonde wig being pulled off before she’s pinned to ground. A man then puts his foot down on her head. Valle said the incident left her with "a bit of a headache."

I wonder what would have happened if she had tried a similar stunt on, say, the President? Or the Speaker of the House? I'm guessing something a lot worse than a "bit of a headache".

These totalitarian Marxist-Leninists are completely out of control.

Well Doug the problem here is that people really don't understand a phrase that's as old as mankind, "trauma is the best teacher"...

When these idiots make a move (such as defacing that ship) suitable amounts of applied trauma will make believers or cripples out of them...

Either way the result is the same, they won't do it again...

OMG, I am horrified at the potential injury that little woman could have caused Rand Paul!!! He is a mousy man and cannot defend himself and this little woman should know better than to attack a mousy man. The Hussy, strumpet, trying to hurt a mousy man!!!

Just answer the question I posed:

"I wonder what would have happened if she had tried a similar stunt on, say, the President? Or the Speaker of the House? I'm guessing something a lot worse than a "bit of a headache"."

These guys did the right thing (minus foot). Kooks rushing a candidate is never a good thing. That's how Bobby Kennedy got killed.

And funny she should mention Nazis, she is paid by a real life Nazi collaborator - Soros - who is also one of the most ruthless capitalist "greedies" there is on the planet.

And Huff-Po is her outlet? Arianna is buying buses for Stewart's "moderate" rally. Is this mercenary instigator of mayhem an example of their moderates? Was Charlie Manson not available to comment for Huff-Po?

We're winning, because they're all losers.
.

Well anon you go ahead and drag your 'big' penis and I'll drag my big gun along...

You take a shot and then I will...

Let's see who's whining and who's walking when its over...

Just a thought experiment, know what I mean?

Hmmm.. "little woman"? Squeaky Fromme was a little woman, capable of massive violence, and the murders she perpetrated are well documented.

Who knows what people like this woman could be carrying, and what she could have done to Mr. Paul. Nor does she have a right to lunge at anyone. I do believe that extremists like herself do feel empowered by the corruption in the dept of justice. I mean, look at what Bill Ayers, Bernadine Dohrn, and the Weather Underground got away with, and we actually didn't have a government feeling they could get away with ignoring such criminal acts.

They use violence, threats and slander, because they can't engage in honest debate, they know they'd be laughed at and reduced to a joke.. so they try and frighten and intimidate others. As to people like anonymous, the garbage they post is the most he or she is capable of