Nancy Pelosi lays her cards on the table: she's going to confiscate your 401(k), your IRA, and everything else she can lay her hands on

It's true: Democrats are plotting the confiscation of your 401(k) and IRA retirement plans. Don't believe me. Believe Nancy Pelosi. 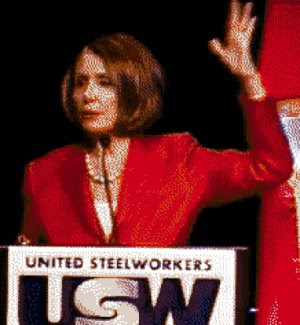 ...We’re talking about addressing the disparity in our country of income, where the wealthy people continue to get wealthier and some other people are falling out of the middle class, when we want to bring many more people into the middle class.

It’s all about fairness in our country.

And when people have those jobs, we want them to be able to bargain collectively. (Applause) We want to pass the Employer Free choice act as well...

If you had any doubt whatsoever that the modern Democrat Party is socialist at its core, Pelosi's talk to the union bosses should disabuse you of that naive notion.

The Democrats are socialists. They are true believers. They're radical sixties retreads.

Consider that France is, at this very moment, suffering from convulsions and gridlock as its unions revolt against hiking the retirement age from 60 to 62. How'd you like to retire at 62? Well, the out-of-control unions think that's radical. And France represents a preview of our future with the unholy alliance of Democrats and union bosses.

The complete shutdown of France's refineries and a rolling transportation strike that has disrupted life for almost two weeks couldn't have come at a worse time for the country's economy... On Friday, France's environment minister Jean-Louis Borloo estimated that about 20 percent of France's service stations had run out of fuel, down from 40 percent earlier in the week before the government began unblocking depots. 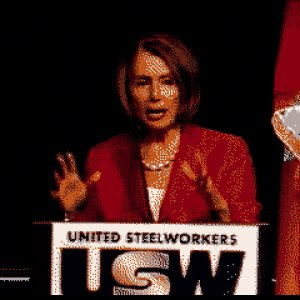 If you'd like to surrender to the first counter-revolution in American history -- the Left's direct attack on the Constitution and America's founding -- then don't vote on November 2nd.

Remember all of the anxiety.

All of the angst.

All of the pain.

Rally your family, your friends, your neighbors and everyone you know.

This is it. The Republic hangs in the balance. Nancy Pelosi just said as much.

Nancy Pelosi is a typical Democrat, just like Hillary Clinton who said "we will have to take things away from the American Public" for the common good.

Yet, they never follow their disastrous offering for others - always allowing themselves little loopholes or big loops to prosper at Our expense.

RANGEL has been pulling a PELOSI - CLINTON - REID SWINDLE for years, and Democrats will still reelect the vivid CROOK.

Here is another laughable example of what the UNION disaster - Democratic Partisan Machine is like:
'Man Fired For Wearing Bush Shirt'

Recently, it was revealed the NJTA was ripping off New Jersey with enormous graft and greed - 95% of the labor in this folly is UNION.

And that mantra, "Sending JOBS Overseas", you can thank Democrats for that one, with massive taxation, unreasonable Labor costs, mindless regulations, etc.

And they blame Corporations? The USA has the highest TAX RATE thanks to the Democratic Party.

It is no wonder everyone seeks to avoid the TAX Folly overseas - just like the Democrats who hide their graft in TAX Shelters.

Can we send them a dose of reality this NOV?

Nancy Pelosi has her people lined up to help help her take every thing you have.

"The American Federation of State, County and Municipal Employees is now the biggest outside spender of the 2010 elections, thanks to an 11th-hour effort to boost Democrats that has vaulted the public-sector union ahead of the U.S. Chamber of Commerce, the AFL-CIO and a flock of new Republican groups in campaign spending."

There is a special place in hell awaiting nasty nancy pelosi. We all know people like kim il jong and that Iranian mental case who's name I won't bother to spell are evil, but I believe pelosi, obama and reid are beyond that. They actually know what their evil deeds will do to a majority of the people in the USA, and they JUST DON'T CARE!

Well, we know that this wretched woman has never read the Constitution, and it is also very clear that she has never cracked a history book.

Because she's too busy reading "The Communist Manifesto."