Justice in the Time of Obama 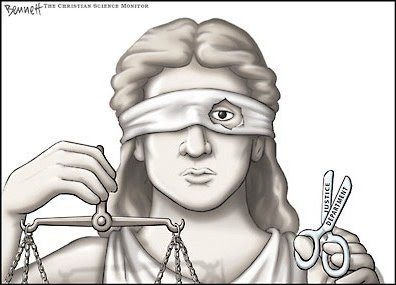 This blockbuster story in the Washington Post today exposes the reverse racism that has engulfed our Justice Department since Obama took office and appointed Eric Holder his Attorney General.

The Post's revelations are so shocking, even a conservative like Andrew Breitbart was startled:

"So the Post does what nobody has been able to do – obtain deep sourcing inside the Department confirming what Adams and Coates have been saying for months. This is a devastating piece of work by the Washington Post. This is a rare moment where the old print media has returned to the higher standards of years past, and reported facts. A week from an election, it couldn’t have come at a worse time for Eric Holder."

Let's Take Our Country Back While There's Still Time.
It's November or Never, America.

Except in Obama's America, "Lady Justice is... depicted wearing a blindfold. The blindfold represents objectivity, in that justice is (or should be) meted out objectively, without fear or favor, regardless of identity, money, power, or weakness; blind justice and blind impartiality."

"Let's Take Our Country Back While There's Still Time.
It's November or Never, America."

Did you see this one?

"Fret not over Republican peccadilloes such as the Tea Party finding the single, solitary person in Nevada who couldn’t poll ten to one against Harry Reid."

Yeah, how the in world could the TEA PARTY EXPRESS give us such weak offerings at this essential time?

But no, it doesn't matter in terms of voting - we have to get the job done:

"Democrats hate Democrats most of all. Witness the policies that Democrats have inflicted on their core constituencies, resulting in vile schools, lawless slums, economic stagnation, and social immobility. Democrats will do anything to make sure that Democratic voters stay helpless and hopeless enough to vote for Democrats.

Whence all this hate? Is it the usual story of love gone wrong? Do Democrats have a mad infatuation with the political system, an unhealthy obsession with an idealized body politic? Do they dream of capturing and ravishing representational democracy? Are they crazed stalkers of our constitutional republic?

No. It’s worse than that. Democrats aren’t just dateless dweebs clambering upon the Statue of Liberty carrying a wilted bouquet and trying to cop a feel. Theirs is a different kind of love story. Power, not politics, is what the Democrats love. Politics is merely a way to power’s heart. When politics is the technique of seduction, good looks are unnecessary, good morals are unneeded, and good sense is a positive liability. Thus Democrats are the perfect Lotharios. And politics comes with that reliable boost for pathetic egos, a weapon: legal monopoly on force. If persuasion fails to win the day, coercion is always an option."

PS: Regarding the TEA PARTY EXPRESS and it's poorly selected choices to make a statement in GOP Primaries, especially O'Donnell.

We have a growing problem with Mr. Miller...

"Senate candidate Joe Miller’s onetime employer must release most records about his tenure as a part-time lawyer for a local government, an Alaska superior-court judge ruled on Saturday."

I remember the Primary well, with all the ugly vitriol for Murkowski by Miller, the Tea Party Express, the Palin Franchise, the likes of Riehl, Reynolds, etc.

They were so overblown, they were actually looking truly unstable after winning the vote - crying foul about baseless conspiracies about standard NRSC procedure with a Republican Senator in a close Primary.

Many Conservative Pundits lost their credibility during that race, as they revealed a lack of objectivity on the big picture - many were so consumed by a clear hatred for the GOP, it was certain they were not thinking clearly.

Nothing wrong with seeking better candidates on a Conservative level, just you don't commit political suicide in the process.

Many of these all knowing Conservative Sideline Cynics, should offer a bit of an apology, but it won't happen. At least they could try to learn a thing or two, before they weaken the effort again.