In the heat of the final days leading up to the midterms, I'd like you to remember when President George W. Bush used the sort of unacceptable, extreme and divisive rhetoric that the nation ultimately rejected.

• When Bush told Democrats to "sit in the back of the bus."

• When Bush admonished Christians and Jews to "punish their enemies."

• When Bush told his political supporters to prepare for combat, screaming that "if they bring a knife to the fight, we bring a gun!" 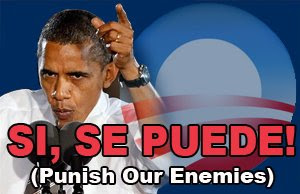 • When Bush challenged his campaign workers to "get in their faces" and "hit back twice as hard!"

Remember all of those nasty, demeaning threats by President Bush?

Neither do I. Because those are President Obama's statements.

The office appears to be way too big for #44.

I am going to make a prediction.

Obama will not be President by this time next year. Biden won't be, either.

The Democrats know that if they do not get rid of Obama and soon their party is toast.

Those who are not of the Chicago Cabal of Czars and Communists in the White House are jumping overboard like rats leaving a sinking ship. Even Pelosi has been too quiet over the last month or so-she is like a two year old, if they been quiet for too long you know they are up to something and that something ain't good.

The Republicans are going to ride in en masse on the tsunami generated by the (formerly) sleeping giant known as "We The People" slamming its fist down and screaming "ENOUGH!".

In a nutshell the Democrats know they need to get rid of him in order to save their sorry asses, the Republicans know he has to go to save the country and the American people have made it clear that all this "Hope and Change" crap stops NOW!

Considering the amount of effort that has gone into hiding everything of Obama's past I would imagine that there are quite a few impeachable and criminal items in that past. His behavior and actions while President, especially recently, are indicative of someone who is not physically/mentally fit to be President.

Either way you best all learn about Section 4 of the 25th Amendment because I suspect that you will soon be hearing ALOT about it.

"Obama will not be President by this time next year. Biden won't be, either"...

Maybe its a good time for both Obama and Biden to visit sunny Nuevo Laredo, Tamaulipas...

Many of our own side, who grew reactionary, emotive, etc., facing fears over Iraq, wanted a more Partisan - Aggressive sounding President.

It was a mistake, having GW Bush one of the more classy Leaders, which is a welcome offering in these matters. It is what Americans want.

Just because the MSM Democrats slandered GW, and exploited understandable fears over Our fight in Iraq to diminish his poll numbers, did not mean his Executive leadership was not admirable. Today we benefit from the professional likes of a Reagan, a GW, a Dole, etc., even if they all were not perfect in terms of their deemed 'Conservative Purity'.

GW Bush was an ideal CEO, and it is ironic as many advertise Texas as the IDEAL Conservative symbol, as GW was a principle player in the success of the Lone Star State - especially bringing such fine Conservative principles to the table.

GW was simply not treated in an objective manner by a number of hot headed Sideline Conservative Cynics who blew with the fashion.

His efforts to reform Social Security were indeed truly Conservative, as even the heroic GIPPER made a simple deal with the old swindler named TIP.

We want serious class in the OFFICE Of POTUS. Carter, Clinton, Obama are prime embarrassments on style, as well as substance. They are insecure partisan power seekers, whose policies are dreadful for all.