If Christine O'Donnell isn't competitive with Chris 'the Bearded Marxist' Coons, why did Obama and Biden both visit Delaware this weekend?

The President and Vice President don't bother raising money for campaigns that are in the bag. And, for Biden, it was his third trip to prop up Coons in recent weeks.

Which means one thing: Coons' internal polling is showing a far more dire situation than anyone is letting on. 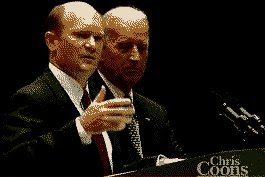 Northern Delaware motorists got whacked on two fronts Friday when President Barack Obama arrived in Marine One from Philadelphia and Vice President Joe Biden flew in on Air Force Two from the south to the New Castle Airport.

There were the usual traffic jams and congestive confusion along Del. 141, I-95 and, naturally, downtown Wilmington, where both appeared at a fundraiser for U.S. Senate candidate Chris Coons at The Grand.

Funnier still, over the last few weeks, Coons has sought to "distance himself from Washington Democrats and President Barack Obama".

As for the meltdown of the Coons campaign? I blame witchcraft.

O'Donnell will smoke Coons November 2. The election of Christine O'Donnell will be the political shocker in the whole history of the United States.

Stan25---I hope you're right. I donated what I could to her campaign.
Go Christine!

Mr. Ross, you are the finest - however this is something you probably know or should know - as the genuine reality is the opposite of your implication.

They are campaigning in Delaware, because these horrid Democrats hope to exploit this RACE, to bring National attention to a disastrous Candidate like O'Donnell, who is easy PREY for their ugly - typical stereotype game.


They look to use the Delaware debacle to help their image.

They always look for poor, weak, easy to debase IMAGES like O'Donnell to smear their opposition by proxy. So Biden, Obama, Etc., go to Delaware and get the MSM to highlight the trips to Nationalize the O'Donnell vs. Coons Race, portraying the foolish offering as typical of all of the efforts to oppose Democrats. To portray the GOP as the Party of O'Donnell. (They even use Palin in this manner right now...)

Same old 'swindle' when Pat Buchanan and Pat Robertson (of 700 Club Fame) took to the stage as major players in the GOP. Democrats live off of portraying their opposition as extreme - they have a vast MEDIA Machine to promote this distorted theme to all.

And when we offer poor Candidates who cannot even be honest about their education, failed to pay taxation - their bills, have no accomplishment, have gained attention by living off of peddling the most obvious Conservative fashion, we only invite the opportunity for these ugly Democrats to take advantage.

It is as old as day. And they travel to Delaware to say "see, this is what Republican Tea Party Conservatives are, just like O'Donnell etc." And O'Donnell is someone we cannot defend.

It is just like having Nancy Pelosi - Barack Obama in ads that run in Ohio, a wise political move to take advantage of the true disastrous offering of the Democratic Party as a whole. O'Donnell is an exception, who would never be nominated without a new force like the Tea Party Express - who failed dramatically in finding a serious Candidate to offer (who has already lost Statewide dramatically in Delaware).

So Obama and Biden say, "see Coons is like us - O'Donnell is that wacky extreme trying to stop us", etc. Sure we know we would take O'Donnell over Coons - but that is not where the competition remains, in the realm outside of the Conservative arena. They would be happy to highlight any Race which would seem attractive to them, especially in a region where they are not considered toxic to the Race itself. Delaware is sadly-insanely still Obama Country, which is even more emblematic of how poor of a choice O'Donnell was at this time and place. Sure, in more Conservative arenas, even she would be possible to overcome such a terrible record - but not in Delaware, not where she is a known flop already with a terrible background.

O'Donnell was giving a Seat to Democrats at the most essential time. It was insane. Even the way it was handled was overtly hostile to the others we need in the GOP - building an invitation for backlash and growing needless enemies, which is terrible Politics. Some fools on Our Own Side, were so lost in their own fashionable obsession, they actually lied about Castle's Record - far from sound, ethical, or conservative.

And at a time when we have to focus on the priorities of checking Obama's folly in the House and Senate, trying to build an essential Majority of the GOP - the Tea Party Express provided us with the worst option in Delaware. And if we cannot be honest about it, we aren't real conservatives, nor are we going to succeed in the future.

Many will try to 'save face' with poorly considered attempts to justify a bad decision. Those of us who have made mistakes in the past, and learn the only way to overcome is to admit it, will urge the best to review this - not try to deny the reality.

O'Donnell = Not a good idea.

PS: I wrote the above before I stumbled across the Hannity Great American Panel thing which discussed this issue.

For Hannity not to realize Obama - Biden, etc., are trying to exploit O'Donnell's presence is no surprise. Hannity is a good man, but not the most savvy of the bunch. His putting Maher constantly on his show as his 'buddy' after 2004, is a prime example.

To see the folly of constantly letting the pathetic Beckel to spout lies is tiresome.

And certainly, Ms. Nikpour has to put a nice face on the O'Donnell weakness. Anyone can see Democrats trying to save their own local Congressional Seats, buck up the base, and try to exploit the terrible O'Donnell Stereotype.

However, I am in no way supportive of this mindless McCain daughter. See, O'Donnell gives fools like Cindy McCain a chance, just like the poor offering gives Obama, Reid, Clinton, Pelosi, etc. a chance as well.

Cindy McCain is a fashionable following enabler of the very worst. She has no clue, and is the product of a Father, who was the product of a fine Military Family. McCain the Maverick Senator never did his homework, and has been an awful Senator. His daughter is following the same misguided path.

But the misguided RINO players, are no reason to still suggest O'Donnell was a good selection. It wasn't. Sound, serious, reasoned, objective, proven, etc., are all typical in a successful Conservative formula. Fashionable hype can sink all, and always will.