They're Not Even Trying to Hide It Any More: Communist Party USA Openly Collaborating With Obama Campaign, DNC and Unions #cpusa

They're not even trying to hide it any longer.

The Communist Party USA is openly and actively collaborating with the Democrat National Committee, Obama's personal campaign (Organizing for America), MorOn.org, Rock the Vote and the AFL-CIO. 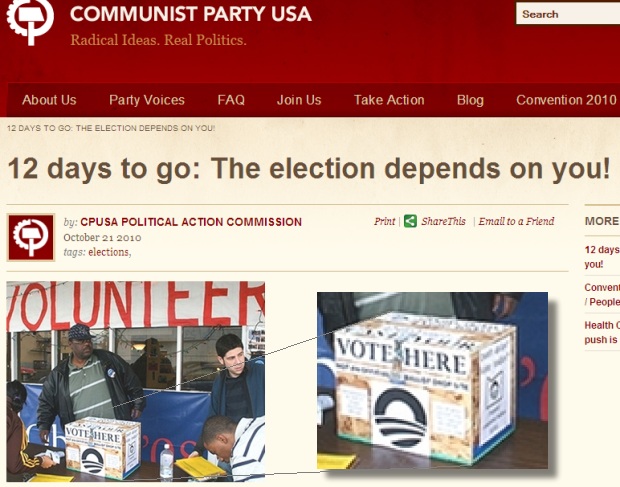 You can't escape it. And consider -- you're putting your ballot in a cardboard box with an Obama logo on it -- what could go wrong? 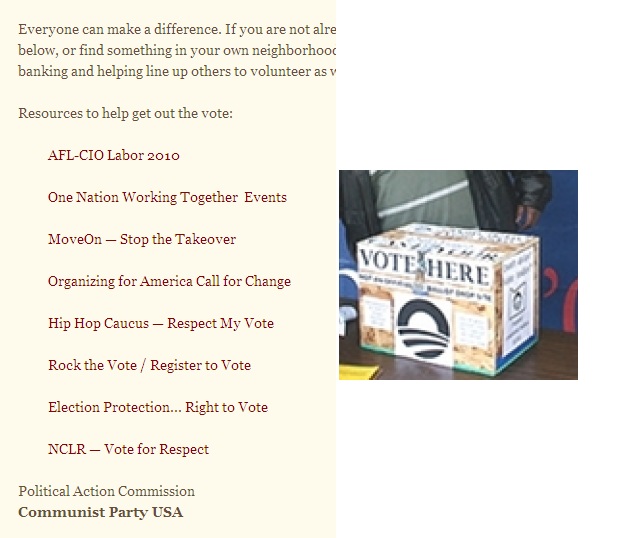 Just wondering: when did it become acceptable among Democrats to openly collaborate with Communists, whose stated goal is the destruction of the American economy?

Or, put another way, when did it become acceptable for Democrats to intentionally destroy the economy in order to "transform" (their word, not mine) America.

Socialism, Communism and any other branch of Marxism is completely incompatible with the United States Constitution. And any Democrats who sympathize with these philosophies have automatically disqualified themselves from holding office. Because they simply can't honestly take an oath to uphold that which they despise.

Patrick Leahy: we're looking at you.

Amazing, but this cannot be a real voting box for Official State, Local, Federal Office in the USA?

Looks like a Union Rep Box for voting leadership or on an issue of some kind.

The association with Obama and the Democrats is clearly a riot.

On another note, I give Buchanan credit in this offering highlighted by DRUDGE. I think it is posted highly because it is a sound offering in the first 2/3rds of the read.

See:
"Republicans will be the beneficiaries of this repudiation, as Republicans are, almost everywhere, the only alternative on the ballot, and because they are seen correctly as having opposed the Obama agenda with near drill-team solidarity."

Here, Buchanan shows NOONAN a little reality, after she played the game to try to appease the FASHION. She was trying to say the TEA PARTY saved the GOP, but that isn't truly reality, it is the disastrous Democratic Party offering which is driving this vote - as usual.

But Buchanan plays the game of the 'bash all sides', taking shots at GW in the last third:

"And if Republicans believe that his deficits did cause it, why have those Republicans not addressed the causes of those deficits – Bush's wars, Bush's tax cuts and Bush's social spending on No Child Left Behind and Medicare drug benefits?"

It reminds one of the BECK fashion being peddled. Suddenly it's Bush's WARS, as if no attack on 9-11 occurred. Of course, Buchanan dances around whether he feels Bush is truly responsible, but he still places the 'indy' candy on the dish. He has done this his entire career - often trying to further himself.

We know the things cited are not the primary cause of the Deficits, and Buchanan should know better. It is more than understandable to want less spending. However, the loss of revenue due to the stunning destruction of the economy via the Mortgage Crisis - created largely by Democratic Party policies peddling influence via HUD-FANNIE-FREDDIE-etc. Just as the Recession of 2000 grew Deficits prior to 9-11, with the loss of Revenue.

Buchanan knows full well, but he plays the old equating game, just the same in the end.

My question is, will the Independent Voters who largely determine election victories these days, remember how bad the Democrats are this time? The third most recent after Carter, Clinton, now Obama?

Will they finally learn?

> "when did it become acceptable among Democrats to openly collaborate with Communists, whose stated goal is the destruction of the American economy?"

Doug, I'm afraid that the only thing I can tell from the pictures and the cpusa site is that the loopy Communists are actively promoting the Democrats, not that any Democrats are collaborating with the Communists. Is there better evidence that there is anything more than a one-way relationship?

Can this possibly get better? It only outs the weirdos. There will be a very tidy division of sane and insane after the elections on Tuesday.