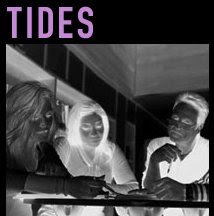 The Tides Foundation is a frequent target of popular radio and TV host Glenn Beck. Tides was founded in 1976 to advance radical progressive causes. It has contributed tens of millions of dollars to organizations like ACORN, CAIR, Media Matters, the New World Foundation, the National Organization of Whores, PETA, the Sierra Club and other radical leftist front groups.

Beck, thankfully, is helping to turn the spotlight on the tangled, symbiotic and often hidden relationships between the Tides Foundation and other radical groups.

So what's the Tides' first tendency? As befits a bunch of Marxist whackjobs, it's to silence free speech. Not sue Beck for libel, I suppose, because they'd get laughed out of court. But to intimidate Beck's advertisers in order to squelch his message.

In an extraordinary move to nip the inflammatory commentary coming from Glenn Beck, the founder and CEO of the Tides Foundation (a frequent Beck target) has written advertisers asking them to remove their sponsorship of the Fox News program or risk having "blood on their hands."

Drummond Pike, who along with his organization was recently targeted by an assassin inspired by Beck's program, penned a letter on Friday to the Chairmen of the Boards of JP Morgan Chase, GEICO, Zurich Financial, Chrysler, Direct Holdings Americas, GlaxoSmithKline, AstraZeneca, Lilly Corporate Center, BP, and The Hartford Financial Services Group, Inc.

Pike calls his foundation's programs "charitable [and] nonpartisan" and are certainly not any part of a "conspiracy to undermine America and the capitalist system". Harumph.

Even the PuffHo ain't buying it.

Rather than chalking up the incident, frightening as it clearly was, to the deranged psychoses of its practitioner, 45-year old Byron Williams, he places the blame on Beck. And in coming to the conclusion that nothing short of financial insolvency will stop the Fox News host, he asks the network's benefactors to take a stand or risk future violence.

Pike's letter (which can be read here) is as deceptive as the organization itself.

Some crazed crackpot with a gun appears to have been stalking Sarah Palin recently.

Should Katie Couric, Charlie Gibson, Keith Olbermann, and every other broadcaster who's tarred her be silenced as well?

If Beck is libeling Tides, then sue him. But you won't. Because he ain't. And your behavior proves that you're first, second and last instinct is totalitarian in nature.

In fact, 'Totalitarian' is a better name for your foundation than 'Tides'.


Linked by: Michelle Malkin, Nice Deb, and Verum Serum. Thanks!

at 11:01 AM
Email ThisBlogThis!Share to TwitterShare to FacebookShare to Pinterest
Labels: Crime, Democrats, extremism, MSM

So now boycotting is "censorship?" I thought it was the free market at work. You know, companies voluntarily choosing to stop sponsoring things.

And you actually want the Tides Foundation to sue Glenn Beck instead. I think that would qualify as official censorship, not this.

Targeting advertisers is a favorite tactic of the left to suppress free speech.

Under the false auspices of government oversight, Goldline is being attacked by Democrats Waxman and Weiner.

You missed the point (not surprising, since you're a lib): Tides should sue Beck for libel if he's spewing falsehoods.

But they won't. Because he's not.

Instead, they manufacture a strawman to censor his speech.

AJB are you kidding me? Of course boycotting is not censorship, but threats are. Even thinly veiled ones.
And you think suing is official censorship? So going through the court system and exposing the truth is censorship to you?

Good God, you've got to be the biggest wimps on the planet to think this is a threat. Ohh, a letter asking you to stop advertising on Nut Beck's show -- scaaaary.

And why can't the Tides Foundation use its free-speech right to make a request to advertisers? 'Cause you don't agree with it. I'd mind your hypocrisy, but you're too much a joke... thanks for the laughs.

"Instead, they manufacture a strawman to censor his speech."

Hello you shower of namby pamby lightweights. Exactly what strawman has been manufactured here? Beck has been going after the Tides Foundation with his idiotic drunken cartoon apocalypse ravings for a very long time now and as soon as the Tides Foundation responds (quite reasonably) you soil yourselves and cry victim. It's beyond pathetic.