Reason #708 to Vote Republican In November 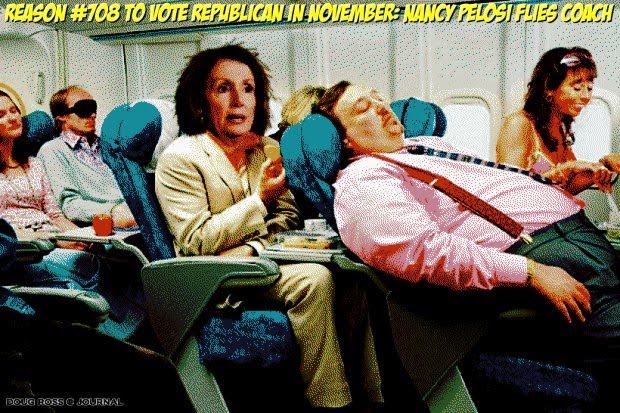 Backstory: Pelosi's Children and Grandchildren Used Military Jets As Cross-Country Shuttle Service So They Could Avoid Dealing With the Rabble.

Although with her millions, grafting her way to government exploitation, she is wealthy enough now to avoid real Americans for the rest of her days, and will probably have to.

However, if we can elect serious Republican Conservatives to power for a decade or so, we could reduce her pensions, seek some fines - fees for her abuse of the Office, etc.

And if we find any evidence of something to press some charges, we will do so.

Either way, getting Nancy Pelosi out of the Speaker's Office is going to make many in this Nation happy - about as happy as those in Chile after the rescue of those Miners. Democrats probably still are deeply unaware, of how poorly their offering is despised.

But wait, what if I have to sit next to her on a flight from Philadelphia to San Francisco? Or DC to San Francisco? These are flights I make several times a year. I gotta think about this. 6 hours in a tin can with Nancy Pelosi could scar me irrevocably.