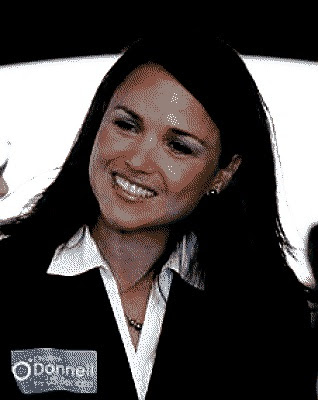 The trend is not the Democrats' friend.

A couple of days ago, a credible source reported that Chris Coons' internal polling showed a narrow lead for Christine O'Donnell in the hotly contested Delaware Senate race.

Today word broke that President Obama will head back to Delaware in yet another attempt to shore up support for "The Bearded Marxist". The visit Monday will mark the tenth trip for either Obama or Veep Joe "Plugs" Biden in recent months.

Gawker's hit piece apparently had the opposite effect of what its instigators had hoped. It generated sympathy for the GOP candidate as the most outrageous of a long series of ridiculous attacks.

And it simply catalyzed the long-simmering rage from the train of abuses heaped upon the people by the Obama-Pelosi-Reid Democrats.

The DNC is picking up the trend that people registered as Democrats are indeed early voting — NATIONALLY — but they are not voting Democrat. They are voting Republican, the way that I did here in Chicago today... if I had to guess they are using focus groups and then extrapolating those nationally to see a trend that horrifies them. They see people in Democrat strongholds like Chicago saying “F-U” to the party and voting Republican. Maybe they are doing exit polling at early vote centers and finding they are being screamed at by lifelong Democrats.

...My friend the fundraiser says they’ve worked out some kind of plug-and-chug mathematical box with what they are seeing in early voting states…when the current Delaware polling and focus group work is considered IN LIGHT OF THIS DOCUMENTED TREND, the DNC is horrified to see that Delaware is trending like the rest of the country…where registered Democrats who are going to vote intend to vote AGAINST the party…straight ticket, top to bottom, AGAINST Democrats.

Delaware might not be early voting... but from whatever the Democrats are seeing internally, if Delaware WAS early voting then Delaware’s numbers would be lining up with every other state.

That means Democrats aren’t safe ANYWHERE and there is nothing anyone can do to change that.

As if to reinforce that message, internal polling apparently shows Linda McMahon surging in the race for Connecticut's Senate seat.

The most curious of [Obama's last] stops is in Connecticut, where the Democratic Senate candidate, Richard Blumenthal, has a comfortable lead over Republican Linda McMahon. Even though the seat appears to be in hand, White House officials view keeping Connecticut as critical to holding on to the Senate.

If you've got a couple of bucks to spare, drop 'em on Christine O'Donnell or Linda McMahon.

It would be great news, to hear Democratic Partisans foolishly aided O'Donnell and our side to victory in Delaware, but it is utterly nonsense to think she will win - and perhaps a sign from sources who simply are not from the EAST.

In all do respect Mr. Ross, and I cheer your efforts, but please, we are Conservative and live in reality.

This offering...
"A couple of days ago, a credible source reported that Chris Coons' internal polling showed a narrow lead for Christine O'Donnell in the hotly contested Delaware Senate race."
...actually sounds like someone from C4Palin who has no concept of reality in political terms.

I simply do not believe it, and perhaps this is just pure wishful thinking - I do hope I am mistaken.

HERE is the real reason why Obama and company will be going to Delaware - to try again to stereotype the Elections as them vs. the ugly IMAGE they present about Conservatives and Republicans via a very weak offering named O'Donnell.

I actually pray this is not reality, but I know the game way too much. Democrats need desperately to have some image of Obama connected to some winning RACES, like in Delaware. They need to also, bolster their loses in the HOUSE with the Congressional offering.

They are going to lose the House and need to save a few Seats in places like Delaware, and if we had ANY body besides O'Donnell, we would be winning this former BIDEN Senate SEAT for 6 years. Instead, we handed it to them.

And HONESTLY, if after this election, some Conservative Pundits cannot be honest about it, we have a problem. If we Lose the Senate Majority by a SEAT or TWO, with a few TEA PARTY EXPRESS Candidates costing us golden Senate Seat Opportunities, then we need to seriously review. We definitely have to stop listening to the likes of the dysfunctional RIEHL's in Our Country - and constructively encourage the Tea Party Express to improve their offering or not follow them over a cliff.

I am not talking about the Tea Party Protests which I took part in. I am speaking about those who always wanted their own gig, who exploited being a purist - vilifying the GOP unfairly for their own gain, who gave us some really lackluster offerings which have greatly enabled this disastrous Democratic Party. Our best and brightest should know better than to follow fashion. Where are the WFB's today? Where are the reasoned, strong, serious Leaders who are willing to say to the frustrated, cynical, vicious, destructive, they are simply not conservative - constructive, and will not be debasing the effort.

The big thing is, the game is insulting to those paying attention. No one should be pretending for the sake of the Team, which eventually weakens the effort. Honest, reasoned, serious, factual, objective, etc., is the way of strength. If we had been this way after 2004, we may never have had Pelosi - Reid taking the US Congress. We may never have had McCain - the Maverick McCain-Palin Ticket enabling the disastrous Obama. We may never have given Democrats enough votes to bribe their way to get a foot in the door to socialized Health Care. We may never have witnessed this garbage for two years. But that is what losing sight of reality can do, it can cost one big time.

We went nutty over the fashion and hype after 2004, and forgive me if I try to stay a little honest about O'Donnell's terrible offering.

I have to agree with Anonymous. I just posted about the issue. Castle had a far better chance, and I'd take his 70% voting record over a zero % we'll get with Coons. I hope I'm wrong as well, but if I'm not, I'm hoping that the Tea Party will vet their candidates a little better next time, and not expect the American people to just vote because they happened to be endorsed by Palin and the rest of the Tea Party.

By the way, I just linked to your ACORN post on another one I just wrote.