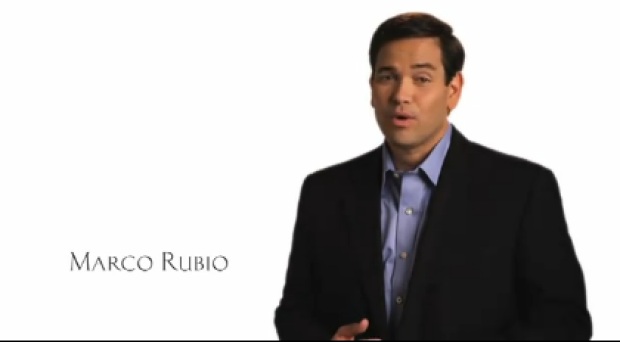 Drop Marco a couple of bucks if you can.

at 9:30 PM
Email ThisBlogThis!Share to TwitterShare to FacebookShare to Pinterest
Labels: Protecting America

Billy Slick Clinton was revealed to be in deep again, trying to swindle to keep this fine Conservative Republican Named RUBIO out of the Senate.

WE know the Democrats who have used RACISM as their game, fear sound Candidates of diverse backgrounds succeeding in the GOP and in Our Country on the side of the Republicans. It ruins their game, which tries to portray all else as bigots.

Clinton always gets a pass, and will here again, even by some Conservatives. He was lobbying in Washington for Obamacare - saying if Democrats don't pass it, they will lose the Midterms like 1994. Hillary hugged Pelosi after the disastrous folly passed. His involvement with the Sestak bribery, and all the other jokes, clearly indicate the Clintons remain major Democratic Partisan Machine players, and should be treated as so.

On another note, doesn't this FRIDAY terror bust smell a little?

"The President directed U.S. intelligence and law enforcement agencies, and the Department of Homeland Security, to take steps to ensure the safety and security of the American people, and to determine whether these threats are a part of any additional terrorist plotting."

Sure, this is a vast CHANGE over "man made disasters" and Bush caused all the terrorism in the World.

The reality is, the successful tracking of the TERROR efforts are a product of the systems provided by the Bush Administration post 9-11. Also, these issues are USUALLY always kept silent, never broadcast in this manner, certainly not by a President - normally it would be done by the Homeland Security Secretary or a National Security Adviser. This was manipulated to the full extent for Public Image by the Obama White House, only a few days before an election. Much like Clinton bombing Iraq on the day of his vote on Impeachment.

I would imagine, these TERRORIST Threats are conducted on a monthly, weekly, even daily basis, and we simply never hear all the details. For it is wise to keep these things secret from the enemy. Today, we had something different, probably because Politicians wanted to exploit the issue for political gain.

Obama used to claim our threat only came from an isolated area in Afghanistan. He belittled GW Bush's GLOBAL focus on the fight against TERRORISM. Obama and his Party also dismissed repeatedly the relation between the Muslim Religion and the monstrous militant threats we face. They were either terrible liars, or utterly wrong - proven again today. Who can trust them now?