The Hindemburg: '91 Democratic seats are in competitive races' 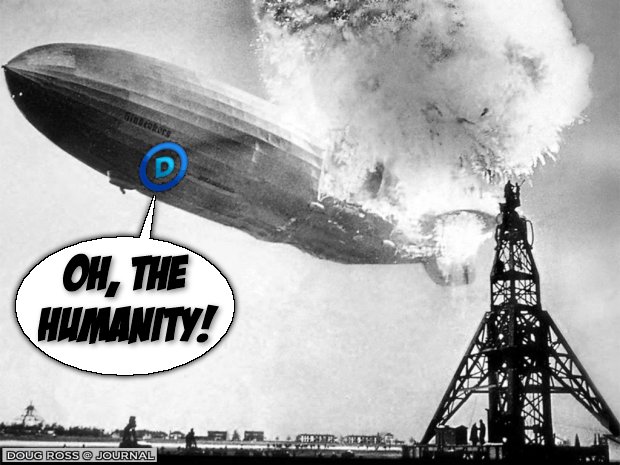 I wish it were 200, and that they were all leaning GOP.

And I wish the SENATE were as dire for the Democrats, but what can one say?

We could have compromised a tiny bit, seeing the priority of TAKING POWER from the nutty Democratic Party - but in Delaware - etc., we decidedly made a mistake.

Regardless, if only we could still win the SENATE as well.

Democrats are horrid, and deserve the very worst. But we only care about their needed demise, for the sake of Our fine Country.

PS: Do you notice Hillary Clinton, having flopped again dramatically with her bragged about - promoted PEACE process with Israel and the Palestinians, is getting another MEDIA pass? I mean we see everything 'smart power' has touched blowing up: Iran being ignored as they stroll to gain nukes (while the Obama-Clinton Diplomatic Team decides to include them in Afghanistan discussions?), North Korea sinking South Korean ships - and is basically ignored, Russia is building everything for Iran - HUGO - etc.

And Hillary Clinton is the Secretary of State of this growing fiasco.

She is never taken to task for any of the vivid failure.

Sure, we should always focus on Obama the President, the Pelosi Speaker, Reid the Senate Majority Boss, etc., seeing this accurately as a Democratic Partisan disaster of Carter Malaise levels - former Clinton Malfeasance folly, but Hillary Clinton is in DEEP in this mess yet again.

She is the author of so much of this disaster, and seems to get an odd pass everytime.


Change is a stinker, and Hillary's a major broker of the crap.

RE: Delaware - I have to disagree with your notion that a mistake was made. Republicans had a choice between a conservative and a career liberal wearing a red tie. I would rather lose with the right candidate than win with the desperately wrong one.

RE: Clinton - media passes at this point are fine with me. The less her monumental failures are put on display now, the greater impact they will have on her when she makes her run at the office. Let us not shoot our ammo too soon.

I appreciate your insight - 'the BAD', but Delaware is a disaster.

You don't run Identity Candidates without substance, and the former pro-Choice O'Donnell is about as weak as it gets. Not paying her bills, having her facade of an organization (designed to give her a career) not pay taxes, lies about her academic record, etc., this is no genuine Conservative (honesty, integrity, serious, studied, accomplished). O'Donnell is a rather unstable player, and reminds one of many exploiting a healthy desire for more sincere Conservative offerings. She has already lost Statewide Races in Delaware for good reason. Even her 'gender - sexual harassment' lawsuit is an emblem of the folly.

The Bottom line, a serious Conservative would know, especially in Delaware, we gave a Seat up to the Democrats for no reason. The Tea Party Express pushed upon us, one of the weakest Candidates which was already rejected overwhelmingly in Delaware. Instead of gaining a Seat which would lean more centrist instead of Democrat, we gave it back to the Democrats.

Castle being far from perfect was not the issue. His 50% ACU rating is tiresome, but that was not the problem. He was going to caucus with the GOP, adding a SEAT in the Senate to the Republicans which has been controlled by the Democrats for DECADES. That was the big story for now, the most important was to say "Biden's former Seat goes to the Republicans", and we get to run the Committees, control the Subpoena power, etc. That was essential, and many foolishly lost sight of the big picture, lost in the fashion.

At this time, nominating an unelectable reject named O'Donnell, was pure insanity. Castle would have won Biden's old Seat - which is essential at a time when we need to have more numbers to grow a Majority. Period. Even if Castle would make us wonder 50% of the time, Coons will be another break for the Democrats who want to continue with this nightmare they are providing - for 6 LONG YEARS.

In fact, a few associates from PA, have actually suggested the association of O'Donnell has had influence in the EAST - as Democrats easily are trying to portray all the Republicans as hapless as O'Donnell (as well as Paladino). We see a number of races closing tighter supposedly, and one has to wonder. They are running ads out EAST, playing on the old ugly stereotypes - and O'Donnell is simply too easy prey in this arena.

We shall see, but I know full well O'Donnell was an enormous mistake. Democrats would have written off that Race with Castle, now they advertise the O'Donnell folly as a National issue.

We gave them a break. It is like walking a batter when your team is up by ten in the 8th.

One has to remember, all of the Candidates are reflections of others, especially in the minds of the Independents. We certainly want better, stronger, reasoned, Conservatives, but we don't want to commit political suicide either.