The Snow Report posts the results of the latest internal polling performed in California regarding the gubernatorial race. And the results have likely set off shock waves not only in the Brown camp, but also that of the tiny Marxist, Barbara "Don't call me Ma'am" Boxer. 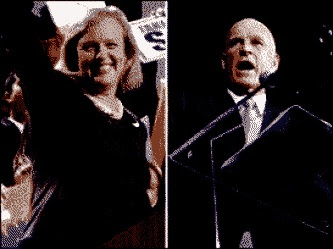 With 5-days remaining before election-day, the race for governor of California has tightened to a dead heat between Meg Whitman and Jerry Brown. Two separate polls confirm that the race is too close to call. In a survey conducted by Hill Research Consultants among 604 likely voters on October 26th and 27th, the race for governor is tied 43% Whitman to 43% Brown with 4% voting for another candidate and 10% being undecided or refused to respond...

...In a separate McLaughlin & Associates survey conducted among 900 likely voters on October 25th, 26th and 27th (300 each night), Meg Whitman has a slight lead over Jerry Brown 44% to 43% with 6% voting for another candidate and 7% remaining undecided or refused to respond. This neck and neck race represents a marked improvement for Meg Whitman who trailed Jerry Brown from October 17th to 25th in Hill Research Consultant polling, by as much as 7 percentage points at one point.

Early Voting: In McLaughlin & Associates survey of 900 likely voters, the early voting is helping Meg Whitman. As of last night, 25% of the voters say that they have already voted by absentee mail in and among these voters Meg Whitman leads 43% to 40%. There are another 27% who tell us they will vote by early absentee mail between now and Saturday and Meg Whitman wins among those voters 48% to 43%. Among the 43% who tell us that they will vote in person on election day, it’s a virtual tie with Meg Whitman 43% and Jerry Brown 45%.

Californians: do you want the same crackpot who got you into this mess as Governor twice before? Or do you want someone who actually knows how businesses work and what they need to thrive and grow?

The choice is clear, California: save your state. Vote for Meg Whitman and reject the twice-failed Brown who has already proven himself a miserable failure and an economic train-wreck.

TURN out seems to be the big issue, how big of a wave will it be, or won't it be?

Rasmussen had an alarming poll in WV, that the liar named Manchin has jumped ahead by 3 points.

One has to wonder what the hell they are drinking in WV. But will the turn out - turn out?

Seeing the Democrats turn to the vapid Daily Show for survival, one can only hope the Nation realizes the JOKE of the Democratic Party is on us.

HA HA! Thanks for posting!!

Not enthused about Meg, but HORRIFIED that petrified fossil Moonbeam is even being considered. Jeebus. I'll vote for Meg, but I'm REALLY excited to vote Carly over Boxer

Don't worry about the polls. Public Policy Polling called today and while I plan to vote conservative all the way, I presented myself as a conservative Republican who will vote Democrat. I said I'm voting for the Democrat governor and senator, and am absolutely certain to vote. I want Obama for another term and I think the stimulus was money well spent.

I just love jiggering the polls.

Now, get everyone you know to go out and vote!