Harry Reid Escapes From Handlers, Beclowns Himself Anew: 'But For Me, We'd Be In a World-Wide Depression'

Based upon his statements over the last few years, Harry Reid is -- at best -- a doddering old fool. 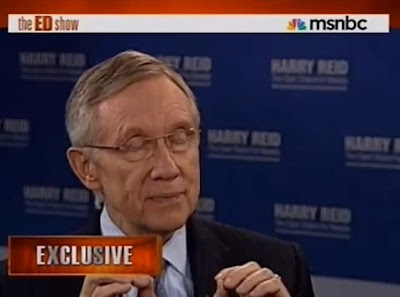 "But For Me, We’d Be in World-Wide Depression"
At worst, well, I'm not a real doctor, but I play one on this blog.

• Speaking of illegal immigration in July 2010, Reid actually claimed that there were no illegal construction workers in Nevada, blithely calling the idea “absolutely without foundation,” and declaring “[t]hat may be some place, but it’s not here in Nevada.”

• With Nevada’s unemployment the highest in the nation at 14.3 percent in August 2010, Reid claimed that his costly, unpopular health care overhaul was a “boon” for the economy, and that the majority of Nevadans’ who oppose the bill suffer from a ““very obvious… lack of understanding.”

• In February 2010, Reid pushed for a massive new deficit-spending bill by claiming on the Senate floor that more men beat their wives because of the high unemployment they suffer under his leadership.

• In January 2010, a new book revealed that Reid expressed his excitement at Barack Obama’s “light-skinned” appearance and the fact that he spoke “with no Negro dialect, unless he wanted to have one.”

• And in 2007, Reid claimed the war was lost, while our own men and women in the military were on the battlefield.

Harry Reid is insane so what does this say about the 'moderate' voters who are piously convinced Angle is the crazy one?

The bane of reality is the middle of the road voter who can't get their sh*t together to make wise decisions.

The sad part, 'moderates' are the voters who decide the fate of the Republic.