Nice: 500 California Highway Patrolmen make over $150,000 annually--and the proposed budget shows a 3% increase for the department to $1.98 billion 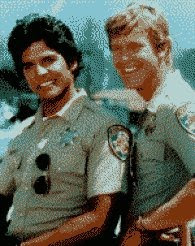 God bless our law enforcement personnel. Hell, years ago, Papa B was some kind of deputy in Fulton County, Georgia. But the public sector unions and Democrat officials, working hand in hand, have just about bankrupted municipalities across the country.

And California is among the worst of the lot, what with a $20 billion budget deficit, $500 billion in unfunded pension liabilities, and a Democrat gubernatorial candidate who wants amnesty for illegal aliens.

But to get the full flavor of just how out-of-control California's public sector unions are -- they represent hundreds of thousands of employees -- let's take a quick look at the compensation of the California highway patrol system. 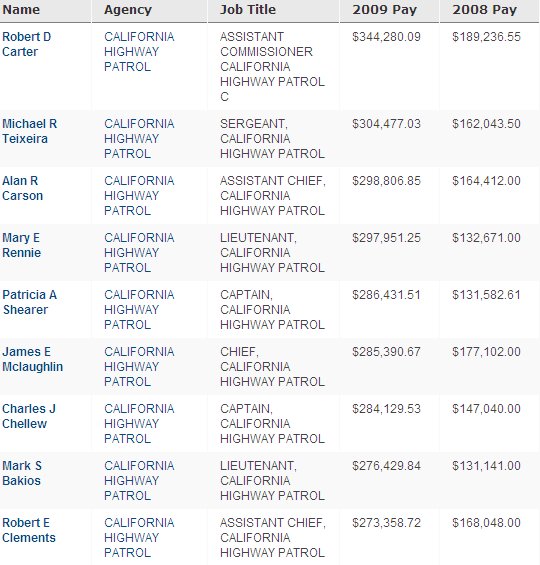 Note the jump in salaries between 2008 and 2009. This is likely due to "pension spiking" or artificially granting large raises just before retirement in order to boost pension payments. 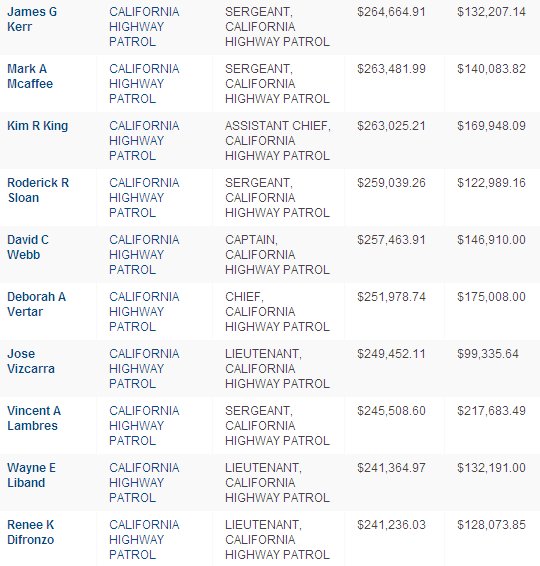 The following is page 10 of the report, each of which has 25 officers per page. 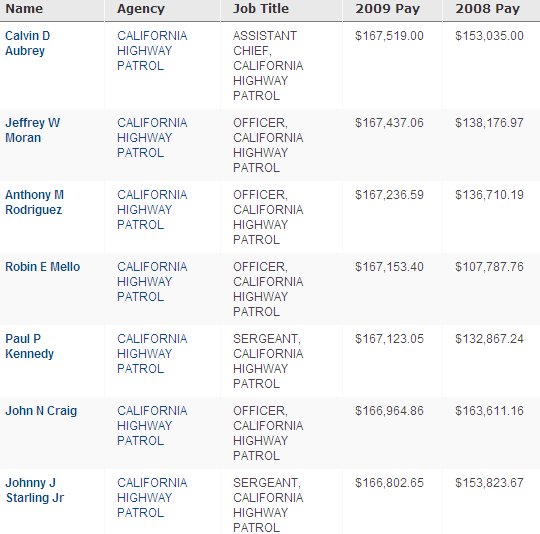 And, best I can tell, there are about 10,000 people employed by the state highway patrol system. Ten-freaking-thousand. And 5,200 of those public employees make over $100,000 annually.

Just a guess, but from perusing the database, it would appear that the average salary is about $110,000.

"But the Republicans are against a woman's right to choose and spent billions in an illegal war in Iraq" is about the most thoughtful response I get from a California liberal. I'm also very glad to have moved to Pennsylvania 10 years ago.

Well, at least you don't have to worry that these cops are on the take. They don't need the graft.

That's what happens when you top out as a sergeant, and work assloads of overtime. A Sergeant III, topped out, makes $9809/month base pay. Add the shift differentials, Duty Station differentials, and Overtime, and you start talking about a LOT of money. Also, the Sergeant level is the highest "labor" level, so they can work as much OT as they can get, if they want.

The State has to take good care of its mobile tax collectors!

The rate these guys are writing speeding tickets, they pay for themselves!

(Haven't checked the numbers but there are a lot more tickets being written.)

Did you see the news clip about CHiPs' Wilcox at debbieschlussel's site?

These are all guys that retired in 2009 and cashed out all their unused vacation time you dummy! Overtime does not count when calculating CHP retirement! Check your facts before you write about stuff in your underwear.