A Democrat insider reports that the party muckety-mucks are "terrified of her winning." Her being the extremist witch who also happens to be an articulate, attractive, Constitutional conservative who scares the squirtage out of certain bearded Marxists. 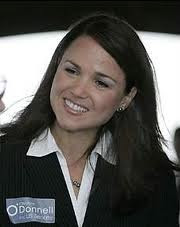 Yesterday, a poll went around showing Christine O’Donnell just five points behind Commie Coons in Delaware’s Senate race. This SORT OF explains the weird amount of time the White House has been spending in a slam dunk blue state.

But, Democrats are ferociously attacking CoD as hard as they attacked Scott Brown in Massachusetts. If she is so far behind, what is the point in beating up on this woman?

This is anecdotal, but I think I know why they are doing this... there are internals showing O’Donnell ahead.

Today I talked to a friend from Team Hillary who is a big Dem fundraiser. He told me that for the last week or so the DNC has been at DEFCON 1 leaning HARD on the rainmakers because they are terrified of a CoD win in Delaware.

The problem is some internal poll that apparently shows that a high percentage of Democrats early voting are voting straight ticket Republican instead…they are Democrats voting against Democrats.

I am still [a] registered Democrat here in Chicago and I voted straight ticket Republican except for Tom Dart for Sheriff because I know and like him. Other than that, it was all Republican. But, in terms of early voting stats, I was a Democrat early vote on paper.

The media is not factoring people like me into the equation... So someone at the DNC came up with a formula that takes all of this into account…and when THAT formula is applied to the Delaware race, CoD is ahead.

And that terrified the DNC enough to send the SOS to the big money guys like my friend for a Hail Mary pass.

Blue on blue carnage. Hate when that happens.


You can support Christine for U.S. Senate here.

IF the STRAIGHT TICKET gets O'Donnell a win, then you can credit the BAD image of the Democrats, and the not so bad image of the Republicans - not the TEA PARTY EXPRESS (ironically).

It is nice to enjoy fantasy once and awhile, but that is not conservatism unfortunately. When you do focus on reality, it is clear the Delaware's Senate Seat was most likely a real gift to Democrats.

I would love it, welcome an O'Donnell Miracle, but Delaware was a disastrous mistake, and we best learn from it. If Schumer is the Majority in the Senate by one or two Senators, look no further than the TEA PARTY EXPRESS for helping to give the Senate back to the Democratic Party this time around.

Polls are all over the place, and they even have Miller ten points down - what a shock, the FASHION picked a real weak offering there as well. Now if O'Donnell is really coming to within 5 points behind Coons, this tells us how easily it would have been to win Delaware with a real Candidate.

No, she is not a good Candidate, lies about so much, without accomplishment, etc., are simply too hard to overcome. She lost Statewides Races already, and will probably lose again - and we may have been able to take a Democratic Partisan Seat - which BIDEN used to occupy, running ANYONE other than O'Donnell.

But we all make mistakes...

Long ago, the fine Mr. Surber tried to apologize to a few of his readers, hoping to get back on the right track with the FASHION (the Fashion is brutal for anyone who dares offer a little honest objective differing viewpoint) - He did so by suggesting O'Donnell might just win, because the ugly Democrats will blow it. On never knows, except Democrats seem to be able to swindle elections rather well. However, with this bizarre Gawker SEX story, they may just garner a little more victim support for Our weak O'Donnell offering.

However, if we enjoy the FEAR from Democrats over the likes of O'Donnell winning, that is truly fun. For a while though, the Democrats successfully have lowered some of the images of the GOP in the EAST with her association - at least that is what some data and first hand testimonials have suggested from the region.

THAT is the REASON why Biden and Obama traveled to Delaware to highlight the O'Donnell RACE, to Nationalize the competition in hopes to stereotype the entire GOP with the likes of O'Donnell. CBS, NBC, ABC, PBS, etc., all played the narrative perfectly, by focusing on O'Donnell and the TEA Party Express - with themes of extreme, angry, incompetent, etc. It is again, too obvious for it not to be a Partisan Machine strategy.

Lucky for us, the Democrats are just that bad, for the Nation not to rebuke them. The question only is, how much will Democrats be rejected?

Will we take the Senate, even with the terrible mistake in Delaware and a few other poor selections?