The nimrods at NPR reportedly claim that they don't receive any federal funding. That's true, but only if you don't count half a frickin' billion dollars that taxpayers spend on the Corporation for Public Broadcasting.

The good news: if we can take over Congress, we can put an end to the kind of senseless partisan manure excreted by state-run media. What is this, East Berlin? We need a state-run media?

I think not. And neither does a real American hero, Jim DeMint. 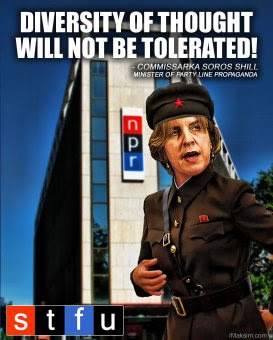 Sen. Jim DeMint, the conservative and increasingly powerful Republican senator from South Carolina, introduced a bill Friday to strip federal funding from the Corporation for Public Broadcasting (CPB) in the wake of National Public Radio's decision to fire Juan Williams for comments about Muslims that he made on Fox News earlier this week.

During a panel about Muslims and terrorism on "The O'Reilly Factor," Williams said he sometimes is afraid boarding an airplane if he sees a person in "Muslim garb." He went on to say that stereotyping all Muslims is wrong.

After an NPR vice president told Williams he would be fired if he did not stop appearing on Fox News, Williams was terminated. He later defended his remarks as truthful and said that NPR is hostage to narrow thinking.

"This is evidence of one-party rule and one-sided thinking at NPR that leads to enforced ideology, speech and writing," Williams wrote on FoxNews.com. "It leads to people, especially journalists, being sent to the gulag for raising the wrong questions and displaying independence of thought."

With federal spending completely out of control and deficits exploding, I can think of an excellent way to save about half a billion dollars.

This is a "no brainer". I don't care if it cost me one dollar in taxes to support them... I don't agree with anything they say or do and my tax money shouldn't be paying for people and organizations that are openly supporting things that I disagree with nor should my dollar be used against me and my ideology. I pay Federal taxes for the military, roads, and law enforcement. That's it! As far as I'm concerned everything else can be cut. I don't want to pay to see my Lord swimming in piss nor do I want to pay for anything else. I'm sick of this. I'm sick of losing my liberties and the government picking my pockets so that I can't take care of my children and grandchildren. I say we "starve them" and cut off all funding. It 's obvious that our government isn't capable of spending our money properly. Cut if off at the source. They can't help themselves. They tax tobacco products at 1000% and nobody bats an eyelash? That's government tyranny. What Founding Father would have agreed with that? It's out of control and we have to make a stand right now... not later.

You don't get to pick where you tax money goes.
It's clear you've never listened to NPR; you would probably like Car Talk on saturday mornings.

To Anonymous: :::sigh::: another ill-informed NPR-listener. You do have the means to stop the taxes/expenses you don't care for-elected representatives. You had it all for the last two years in DC with the Republicans sitting in the bleachers and yet you still have the wars. Tax payer Christian programs? What, do you and Randy Quaid hang out together in Cheech and Chong's car? State backed media is right out of the Soviet Union and Nazi Germany-we don't need that. Go back to your sugar daddy George Soros and tell him to pony up some more bucks for Frau Commissar Schiller's NPR. If NPR was right wing, I'd still say the same-defund state backed media. Like Commissar Schiller said: it's not a significant portion of their funds...so what the hell, NPR won't miss it.