Gee, this is quite a shocking turn of events. Interviewed on Bill Maher's "show", Rob "Meathead" Reiner stated that Constitutional conservatives are Nazis. 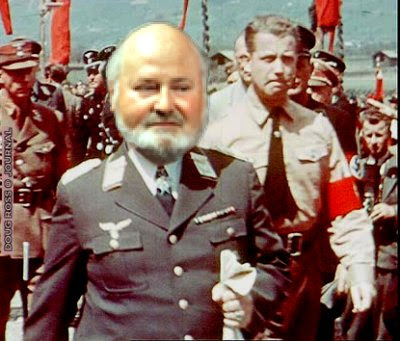 "[Hitler] wasn’t a majority guy, but he was charismatic and they were having bad economic times – just like we are now – people were out of work, they needed jobs and a guy came along and rallied the troops. My fear is that the Tea Party gets a charismatic leader, because all they're selling is fear and anger and that's all Hitler sold. "I’m angry and I’m frightened and you should hate that guy over there."

• Who wants more centralized, authoritarian government like Hitler assembled? That would be Reiner and the left.

• Who wants to eradicate the Constitution as it was written, as Hitler did when he took power? Reiner and the left.

• Who wants to confiscate more and more private property, just as Hitler did? Yes, Reiner and his gang of useful idiots.

• Who suppresses freedom of speech, freedom of assembly and freedom of the press, just as Hitler did? Reiner and the left.

• Who wants to confiscate the citizens' firearms, just as Hitler did? Reiner and the left.

• Who despises individual liberties for all citizens, irrespective of race, religion, creed or color -- like Hitler? That would be Reiner and the left.

In fact, a retrospective look at the history of Nazism would find far more similarity to today's "progressive socialists" than any other segment of society. Of course, the pond algae named Maher and the corpulent loon named Reiner know more about Lindsey Lohan's latest run-in with the law than they do of history, economics and philosophy.

And let's remember. The Nazi Party was an acronym for National Socialist Democrats. And we're not the guys who ran a charismatic demagogue for President and who was accompanied everywhere by his own creepy, personal iconography.

But they don't care.

They and those of them dominating the Media Establishments in the USA, will lie until the end.

They are even going to try to steal more elections, it is going to get much worse.

Unless we get it together.