Beautiful: Obama's New National Security Adviser Had a Direct Hand in Destroying the Housing Market as a Fannie Mae Executive

The President's new National Security Adviser is man named Tom Donilon. And he is a startling choice for the role, seeing as how he spent six years as an executive at Fannie Mae, according to Josh Gerstein. 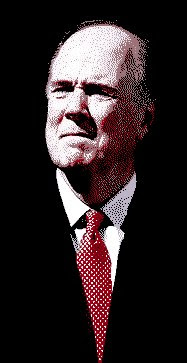 ...Donilon left the firm as it was mired in an accounting scandal in 2005, three years before Fannie Mae’s spectacular collapse when the mortgage market imploded in 2008. Investigators never accused Donilon of wrongdoing in the accounting scandal, but Fannie ultimately paid $400 million to the federal government to settle charges that the company misstated its earnings between 1998 and 2004. The government sued three top Fannie Mae executives to recover millions in bonuses based on the allegedly falsified reports, but Donilon was not among them... A former official who led one of the main investigations into Fannie Mae said Friday that Donilon didn’t play a role in the misstatements but tried to pressure lawmakers to derail the probe.

“He was in charge of the lobbyists. ... That process involved using the Hill to rein in the regulators... And there’s no question that Congress played a major role in enabling Fannie Mae to escape regulation and avoid increasing their capital, which is what eventually killed the company.”

...A 2006 report on the federal “special examination of Fannie Mae” is replete with references to Donilon, who worked at the firm from 1999 to April 2005, first as senior vice president and general counsel and later as executive vice president for law and policy. The report quotes from a 2004 Donilon e-mail plotting efforts to resist federal regulators’ attempts to force changes in Fannie Mae’s executive structure.

...The Obama team’s tolerance for Fannie Mae veterans has always been murky. During the 2008 campaign, Obama picked former Fannie Mae CEO Jim Johnson to lead his vice presidential search but dumped Johnson after his ties to the worsening mortgage crisis made him radioactive [and] a longtime Democratic operative who served in the senior ranks at Fannie with Donilon, Thomas Nides, was nominated last week as deputy secretary of state for management...

Even the White House' favorite press release publisher -- you may know it as Associated Press -- is reporting upon the troubling background of Donilon.

Before President Barack Obama picked him to be his next national security adviser, Tom Donilon was a lobbyist for mortgage giant Fannie Mae and fought off congressional attempts to impose new regulations...

...A longtime Democratic operative, Donilon for six years beginning in 1999 was a registered lobbyist and top executive at Fannie Mae, leaving in 2005. His tenure coincided with efforts in Congress to rein in the mortgage giant with tougher regulations and greater oversight.

A Democrat political operative -- who is directly responsible for helping destroy the American housing market and touching off the current financial crisis -- is named the National Security Adviser?

And the next time some liberal nut-stick blames Bush or the Republicans for the current financial disaster, simply point them at the Congressional testimony that sets the record straight. Democrats' failed social engineering policies -- just like "Great Society" and the "New Deal" and all of their other Ponzi schemes -- caused the collapse of the housing market. And that is the inconvenient truth.

Are you going to take care of business in November? And, by that, I mean vote the straight Republican ticket? I hope so. Because it may be our last chance to turn back the tide of insanity and corruption sweeping Washington.