Go figure: a hapless, failed politician with zero media experience and a pathetic drone of an op-ed writer have achieved the lowest Nielsen ratings for CNN in a decade. And, given its programming over that period, that's really quite an accomplishment. 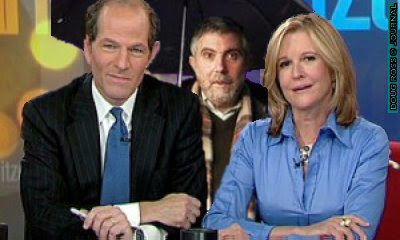 Monday night was the lowest weekday prime time rating average in more than 10 years, since June 28, 2000. And it wasn’t just the 8pmET that was seeing low ratings.

My careful analysis has determined that Parker-Spitzer and King's combined ratings trailed those of MSNBC's Mr. Ed show. Another hilarious stat: the re-run of O'Reilly at 11pm beats the 8pm Olbermann slot in prime time. By 150%.

I tried to start a helpful meme on Twitter (#ParkerSpitzerReplacements) to suggest some alternative pairings for CNN, but so far the company's executives haven't sent me a thank you note.

CNN has hired some of the biggest fools. Remember when they admitted to reporting Saddam's propaganda via Iraq?

Reminds one of the folly of Reid, Pelosi, Obama, Clinton, Carter, etc.

The reality is, if you were thinking about getting in a car with someone who is a sincere Democratic Partisan, you might want to take the Bus.

This might be the first time Client Number 9 sucks this hard.

I guess creating a Palin-Bashing-obsessed show is probably not a winning (or entertaining) strategy for CNN.

Starring the Krugster as the Family Dog.