Thanks to a Doug Powers tweet, we find West Texas Boy's refreshing retort to the collection of hippies, union thugs, Communists, Socialists and other crackpots that left the Washington Mall covered with refuse yesterday. 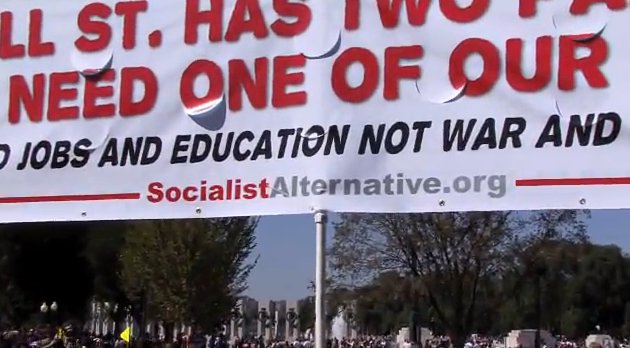 I've redacted the curse words to maintain my pristine G-rating, but you can visit the original to experience the full flavor.

I am so f***ing tired of hearing - from both sides of the spectrum - that something needs to be done about "jobs."

Jobs are a byproduct of healthy industry. They are not a goal in and of themselves and they most definitely are not something the government itself should be trying to encourage or create. 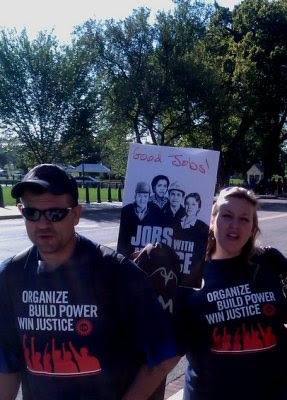 Jobs are what happen when someone has too much work to do by himself, so he gets someone to help. If you want to work, GO F***ING WORK. Start a f***ing business. Find something that you can do and do it and sell the product of your labor to others.

What? You don't want work for yourself? You want to work for someone else? Fine, but it's not businessowners' responsibility to employ people and its not the federal governments responsibility to somehow force them to. If you want a f***ing job, then AGITATE THE F***ING FEDERAL GOVERNMENT TO EXPAND BUSINESS AND "JOBS" WILL COME. Make it easier for the people who actually do business and jobs will come as a byproduct. Jesus Christ, and you're also asking for higher taxes on the very people you need to create your precious JOBS? ARE YOU F***ING KIDDING ME?

WHAT THE F*** HAS HAPPENED TO THIS COUNTRY? Why does everyone want to be treated like a child? And the g****m federal government ENCOURAGES this s***.

I am so f***ing tired of this straight out of Marx s*** that somehow the people are just entitled to share in someone else's fortune and capital in the name of "jobs." GO MAKE YOUR OWN F***ING JOB.

Businesses aren't in the business of making "jobs," they're in the business of CREATING VALUE FOR THEIR OWNERS. When you say that a business should be making more JOBS, you are saying that the capital of those business owners should not actually belong to them and belongs to the "workers". Thanks a f***ing lot, Stalin.

Has it every occurred to these people that only one of those is actually the responsibility of the federal government to fund, and its not "JOBS".

I am surly this morning and this isn't helping.

It's called the entitlement mentality and it's interwoven with the Democrat Party. Interestingly enough, the welfare state is collapsing around us -- across the globe -- and these numb-skulls are too dimwitted to realize it.

It's a shame electro-shock therapy has fallen out of favor.

That is a perfect symbol for the disastrous Democratic Party.

They followed the nuts, kooks, UNION THUGS, etc., right off a cliff, because they were peddling influence to the FASHIONABLE.

We must never turn towards their folly, pushing an identity movement which is far from the reality of the true offering.

The failure of these Democrats to be reasoned, to be objective, to be honest, to be sane, to be ethical, etc., is wreaking havoc on the USA.

They bow to the ugly insane every day, and we all pay for it.

Hopefully, the mature adults will overcome the folly this NOV, just as wiser - cooler heads did in NJ with Christie.

I am not sure electric shock will worth after frontal lobotomies. There really are zombies, mostly in the union sector, though you can find them around colleges, near the border for a short bit, and such. There is, if I am to understand correctly, only one cure for that once in the final stages. Them or us, I guess.