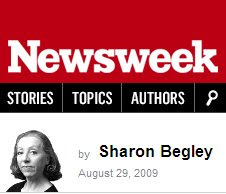 Decades from now, few will remember the name Sharon Begley. Even fewer will recall the malevolent Democrat newsletter known as Newsweek Magazine, which recently sold for $1 (overpriced, at that).

No, I don't mean an issue. I mean the entire freaking magazine.

Anyhow, on 28 August 2009, Begley penned one of the most disturbing pieces of unvarnished propaganda ever seen on American soil: it was entitled The Five Biggest Lies in the Health Care Debate.

Begley was doing her best to move reluctant voters left while encouraging Democrat politicians to pass the 2,400-page collection of fecal matter known as ObamaCare. Among her amazing collection of lies?

You'll have no choice in what health benefits you receive. The myth that a "health choices commissioner" will decide what benefits you get seems to have originated in a July 19 post at blog.flecksoflife.com... In fact, the House bill sets up a health-care exchange...

Really? The child-only health insurance market has already been decimated by Obamacare. McDonald's is reported to be dropping their employee health plans and Principal Financial is exiting the health insurance business altogether.

No chemo for older Medicare patients. The threat that Medicare will give cancer patients over 70 only end-of-life counseling and not chemotherapy—as a nurse at a hospital told a roomful of chemo patients, including the uncle of a NEWSWEEK reporter—has zero basis in fact...

In fact, Sharon (if that is your name), perhaps you saw the following headline: "Susan G. Komen Foundation and Ovarian Cancer Alliance Decry First-Ever Medicare Denials of FDA-Approved Cancer Drugs.

That's right: cancer patients are fighting for drugs that are now deemed too expensive thanks to Donald Berwick, the man Obama wouldn't subject to Senate scrutiny.

Illegal immigrants will get free health insurance. The House bill doesn't give anyone free health care (though under a 1986 law illegals who can't pay do get free emergency care now, courtesy of all us premium paying customers or of hospitals that have to eat the cost). Will they be eligible for subsidies to buy health insurance? The House bill says that "individuals who are not lawfully present in the United States" will not be allowed to receive subsidies... 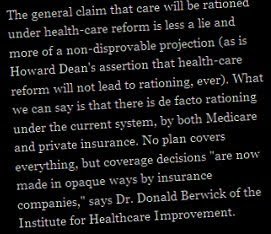 All efforts to amend the health care bills to require a photo ID, a Social Security number and similar measures were defeated on party lines. This is consistent with a June 2009 report ("If the American people found out...") that "[pro-illegal immigration group] La Raza said if they get this, they don't even care about amnesty, because they've fixed it so that one family member can apply for all extended family members."

Put simply, do you think the same administration that sued Arizona for enforcing immigration law will deny health care to undocumented Democrats aliens?

Death panels will decide who lives. On July 16 [2009] Betsy McCaughey, a former lieutenant governor of New York and darling of the right, said on Fred Thompson's radio show that "on page 425," "Congress would make it mandatory…that every five years, people in Medicare have a required counseling session that will tell them how to end their life sooner, how to decline nutrition." Sarah Palin coined "death panels" in an Aug. 7 Facebook post...

Not that the propagandists at Newsweek are paying attention, but Obama's budget director Peter Orszag all but admitted that Obamacare is a rationing system. And those who decide the rules for rationing will, in effect, serve as a death panel.

The government will set doctors' wages. This, too, seems to have originated on the Flecksoflife blog on July 19. But while page 127 of the House bill says that physicians who choose to accept patients in the public insurance plan would receive 5 percent more than Medicare pays for a given service, doctors can refuse to accept such patients, and, even if they participate in a public plan... 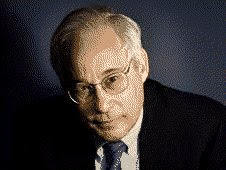 As the state of California has discovered, Obamacare does -- in fact -- set price controls. And, as everyone but the posse of economic illiterates known as the modern Democrat Party knows, price controls determine wages.

* * * * * * * * * * * * * * * * * *
Sharon Begley has proven herself a disgraceful hack. She might even be 'historic'. Because when a 'journalist' parrots such obvious, despicable lies in the service of a tyrannical central government, he or she has become an organ of destruction.

I hope Sharon Begley never needs a treatment of Avastin -- or another pharmaceutical innovation. Because it is all but certain that our current level of care will be destroyed by a huge collection of federal bureaucracies that can't even run a weather-stripping program.

And these Democrat politicians will be long gone when the entire system collapses.

I find it absurd that she could make those claims when she, and her sources, clearly had no idea what was actually in that 2,400 page monstrosity, or how unaccountable federal agencies would implement it.