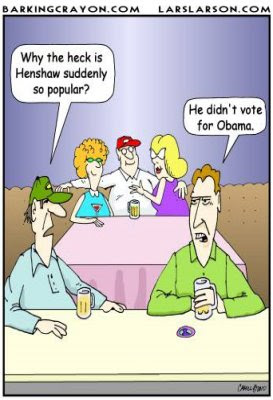 This Autumn I Hear the Drumming, More Brain-Dead in Old WaPo: Driscoll
L.A. Times’s Fake Front Pages Nothing New — And Doing Nothing to Save the Paper: Patterico
Rep. Loretta Sanchez and the Bathos of Race: Hanson

For Obama, Mexico Comes First: AT
Government-Run Health Care: UK pundit advises the murder of all disabled children: BlogProf
George Schultz Observes That Obama Is Out of His Mind: RWN

Another interesting group of links, thanks.

Driscoll and Patterico are simply outstanding.

Of course in regards to smears, Riehl should know this subject very well, as his 'impeachment' vote folly was perhaps the most absurd of all time.

Riehl is one sad embarrassment for the rest of a fine Conservative movement.

In further regards to Riehl's ugly smear of Castle, which resembled ugly Democratic Partisan sophistry - which many Conservative Pundits lost credibility over - Levin's distortion of Mirengoff was just as pathetic.

We see the foolish product of the mindless Fashion:
'O’Donnell getting trounced in race GOP once led'

At first I simply did not care about who was battling in the Primaries, just strongly objected at the unethical, disgusting, vitriol focused upon the Republican in the case - as I believed it is poor politics, guaranteed to lead to enabling the worst, building opposition and enemies needlessly.

But then I studied the Candidate of Ms. O'Donnell the Fashion was trying to empower, slandering the likes of Castle. I was simply shocked at the foolishness, coming from some in the once sound Conservative side - to appease a Fashionable Identity Movement. O'Donnell is a terrible offering, and was a huge mistake. One can pray for a miracle, and I hope I will be proven wrong in the end.

Certainly we are on the right side of history, but we clearly have a reactionary, emotive, hyperbolic, etc., population which leads to a very self destructive effort. They won't bother to apologize either, for their destructive efforts either. Ego and insecurity are blinding factors.

We most likely, have given the Democrats a Seat in the Senate, one which was occupied by Biden for years, at a time when taking the Majorities in the Senate and House is essential. The Fashion was utterly foolish in this case. Even with Castle voting 50%, with Republicans, he would have won easily - while O'Donnell was a gift to Obama, Pelosi, Reid, Clinton.

Coons is a disastrous extreme Democrat, who will occupy this Seat for another 6 years. Instead, we could have had a moderate Republican who would have caucused with the Conservative GOP Majority, further empowering McConnell and Company to block Obama.

Then we could have challenged Castle after the 6 years, if he voted poorly as a Senator. Now we will have to wait to take the Democratic Partisan Seat, whose disastrous offering will be hidden with the potential gridlock coming.

It would help, if the mistakes are recognized. If Conservatives return to objectivity, honesty, basis, etc., and reject the ugly offering of the reactionaries.