• The Hill reports that the President will convene a talent show to celebrate the new year.

President Obama is ringing in 2011 by hosting a talent show on his Hawaii vacation, according to the White House... Burton said that the president had also spent time reading "President Reagan: The Role of a Lifetime" by Lou Cannon, "The Thousand Autumns of Jacob de Zoet" by David Mitchell, and "Our Kind of Traitor" by John le Carre... The president spent Friday morning working out and then went to play golf.

Any guesses as to the President's talent? And the First Lady's?

• CNet relays a prediction that AT&T could lose up to 6 million subscribers with the introduction of the Verizon iPhone. 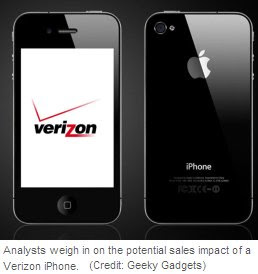 ...Apple will "probably" introduce of a Verizon iPhone after next week's Consumer Electronics Show in Las Vegas [and] analysts are already predicting the number of AT&T customers who will defect to Verizon for its new iPhone... The estimates range from 1 to 6 million moving from AT&T to Verizon, although the bulk of sales of a potential Verizon iPhone would still come from current Verizon customers updating their existing phones...

...The Bloomberg article quotes John Hodulik, an analyst at UBS AG in New York, who comes in "somewhere in the middle" with his projections, saying 2.3 million would switch from AT&T to pick up a Verizon iPhone. Hodulik expects AT&T would sell 8.8 million iPhones in 2011 (down from 15.6 million in 2010) and that Verizon would sell 13.3 million iPhones in 2011. Of those 13.3 million, 10 million would already be Verizon subscribers and the rest would come from other carriers.

CNet lists a humorous mitigating factor: the performance of AT&T's network may improve with a large bloc of defections, so some subscribers may end up staying.

• The Lid notes new evidence that the global warming bunko scam is even more fictional than we had thought.

Which is why the Warming Grifters will have to go back to basics in 2011.

at 11:46 AM
Email ThisBlogThis!Share to TwitterShare to FacebookShare to Pinterest
Labels: Climate, Linkfest, Obama, Scitech

Because I'm grandfathered into the unlimited data plan, I'll probably stay with AT&T when my contract comes up later this year.